Having athletes foot or just smelly feet in general stinks (pun intended) and is kind of embarrassing. Imagine going to someone’s home and stinking up their entire place? If you don’t have athletes foot but your feet still smell then it’s very possible that the problem is the material your shoes are made of. When there isn’t proper airflow and the material is not “breathable” is when the stinky problem arises. The StinkBOSS Shoe Deodorizer is the gadget that will take the funk out of your funky smelling shoes.

Unlike anti-odor sprays you can purchase, the StinkBOSS kills the odor causing bacteria at the source. The device uses a unique enclosed design that circulates ozone molecules through smelly materials, inside and out. Car detailers also use ozone machines to get rid of foul odors in cars and the same method is being applied here but on a smaller scale for small items. 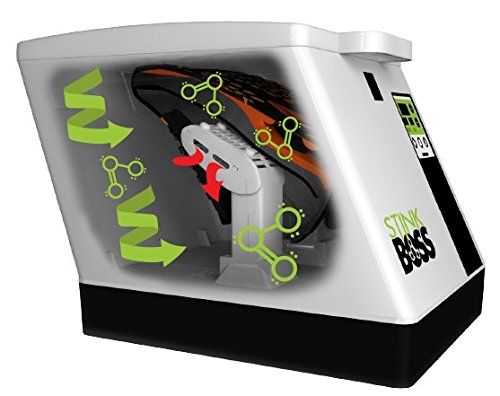 Ozone is able to kill up to 99% of bacteria and viruses without the damaging effects that various chemicals and solvents may have. Using ozonr is also more environmentally friendly which produces zero waste. You can use the StinkBOSS on other small items such as hats, gloves, pads, boots, and even small compact bags.

The StinkBOSS offers variable cycle times depending on the intensity of the smell. From as little as 90 minutes for minor funk and up to nine hours for stuff that can knock out an entire family in the home. The StinkBOSS Shoe Deodorizer is available on Amazon for only $149.99.