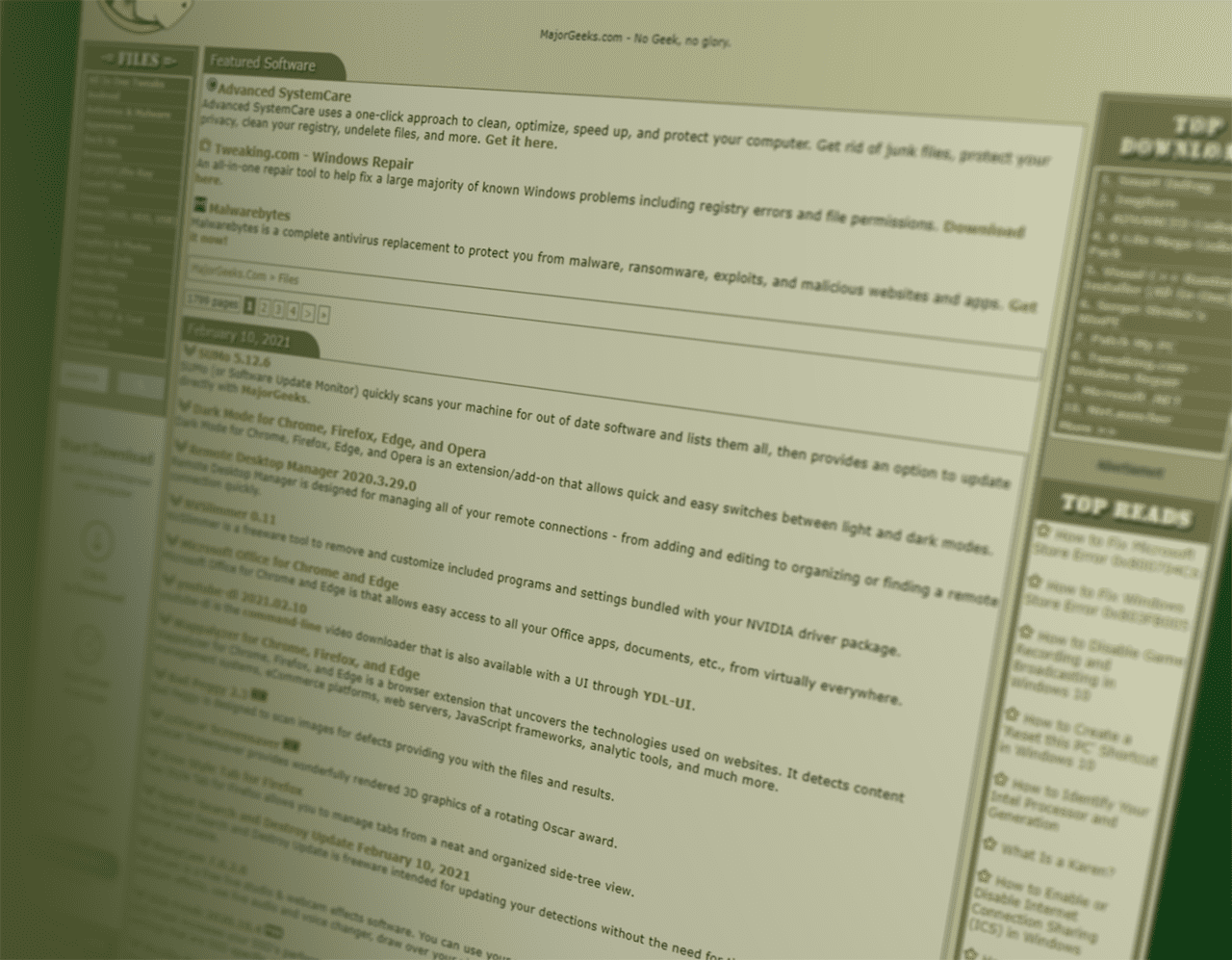 As a frivolous free software download site on one of the lowest ends of the Internet, Major Geeks does almost everything wrong in the website department. It’s an advertising nightmare with no room for discussion, ratings, or reviews, and sends you to all the pages on the web of programs you don’t want on your computer.

First thing first: Major Geeks is home to “swag” – a very outdated term for merchandise that matches its name; a newsletter for things you already knew; inactive forums; and tutorials for issues you don’t have – such as, and I quote: “What Does Stonk Mean?” Yep, that’s a tutorial on here. From the bewildering cartoony logo at the top of the page down to… actually let’s be honest here you’re not getting close to halfway down that homepage, it’s enormous; there’s enough content here for you to ignore and go to probably any other website instead for your problems.

Here’s how this major geek would improve their website…

Buckle up, folks. I got some improvements that might just make Major Geeks a functioning website. First off, it’s time to drop the logo and green color scheme; it makes me feel like I’m living through Vietnam war propaganda, and we all know who came out on top there. Except for this website, which thinks the US won… or that the war is still ongoing somehow.

Anyway, love the cartoon style, but let’s be real here, the website has nothing to do with any kind of war theme, so I’d go with more of an actual “Major Geek” theme with perhaps an acne-ridden teenager’s face with terrible hair and glasses that don’t suit him. That’s if you’re still down for this stereotype to rule the show. As for the color scheme, you can’t go wrong with white and blue. Red, white, and blue if you’re a true patriot. And to move into a more modern aesthetic, black and grey for all the real geeks who know that dark mode is superior.

Amidst the jokes across the website that ultimately fall flat, there are many subsections here that include stuff that could be great, but you just end up disappointed. Let’s take the Games section for example. Click on it and you have a multitude of different genres to please everyone. Then it gets depressing when you find out they’re all games that are at least 3 years old, called “Dwarf Fortress” or “Alien Strike”. I mean, look at the names, they spell out disaster. The amount of downloads here is guaranteed to give you viruses – which leads to coming back to the website for answers on how to remove them – only to download more viruses, and the loop continues like this until your computer explodes.

The solution to all this is, well, firstly test your games first before you advertise them, and perhaps to review more up-to-date software. Many of the advertised programs are not used due to much better alternatives which anyone who is a “Major Geek” will already be aware of. Instead of being a site for illiterate Internet users, perhaps direct them to better repair sites and methods, and give them content that is worth their time, rather than viruses and scams galore. As an example, there’s a surprising multitude of useless hard drive-related software that is trying to replace a free – not to mention, virus-free – built-in Windows alternative that nobody with brain cells will touch with a ten-foot pole.

Not a great experience overall, but if you can handle all these problems, perhaps you’re a better geek than I am.

Here are some questions you may be asking yourself about this web page:

If I can use a different site to get my software, should I?

The simple answer is yes. If you’re looking for open source software or just software downloads in general, other popular sites like Softonic are much better. They often have a much more functional search engine as well. The Major Geeks one is pretty lousy.

No, not intentionally. But they are promoting software that is known to be malicious, and they are not testing their software before they make it available to download. So while they’re not trying to scam you, they are exposing you to malware.

Do they offer secure downloads?

Yes, everything is protected using an SSL certificate, so your connection is secure. However, the software they are promoting is not necessarily safe.

Yes, but we recommend you don’t. It’s much easier to download web browsers from their original sites (Google Chrome, Mozilla Firefox, etc) and let them auto-update on their own to the latest version.

Do they offer direct download links to their free software?

Yes, but as we said before, use it at your own risk. We don’t test the software here for safety or maliciousness.

Do they have any software for running virtual machines?

Yes, they have a couple of options, but they’re all quite old. We recommend using VirtualBox or VMWare Workstation Player instead. Just be aware that they take a bit of knowledge, so unless you’re a super geek to begin with, you’ll probably need to do some research first.

No, we recommend you get your Windows updates from Microsoft directly.

How’s the selection of software for Windows Vista and Windows XP?

Actually, pretty good. These operating systems are so old at this point that most software will work fine on them. All the top downloads on the site are probably from this era anyway.

What about Mac or Linux software?

Yes, they have a small selection of both. Again, we recommend getting your software from the original developers whenever possible.

Do they offer any mobile apps?

No, they don’t currently offer any mobile apps.

Not even Total Control?

No, they don’t offer any mobile software at all. You can grab Total Control on the official website. You can be sure they’ll keep it up to date as well.

What about emulators? Are there any on MajorGeeks?

Yes, but again, they’re very outdated. We recommend using RetroArch or OpenEmu instead.

Are the reviews any good?

What do they have in the way of customer support?

We’re not sure, but we think it’s just a FAQ section full of questions that nobody ever asked.

Is there anything good on Major Geeks?

Well, no. But if you’re into outdated software and viruses, then this is the place for you!

We hope this has been helpful in your quest to avoid Major Geeks at all costs. Stay safe out there, and remember: if it ain’t broke, don’t fix it. Especially if you’re not a Major Geek.

How Impulse Control Disorder Starts and Technology to Treat It

7 Technologies To Help You Beat Loneliness