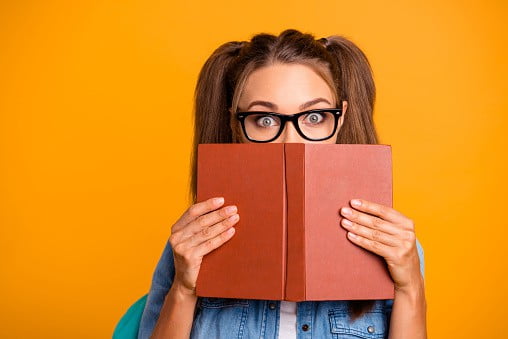 Every nerd has a library of stories about geeky heroes and heroines. In the same way that Superman’s Fortress of Solitude is a place where he can get away from the world and get back to his best. A teen in your life might enjoy reading these geeky books. They’ll be grateful for the hours of reading pleasure you gave them.

It’s time to embrace your inner nerd, because everyone else does, too. These ten books will make you want to read more about life, the universe, and other things.

Another Interesting Read: What Is The Most Expensive Lego Set?

1. I, Robot by Isaac Asimov

I, Robot is a collection of short stories about Susan Calvin, a robot psychologist, and how she uses “robot psychology” to study and correct robot behavior. A lot of attention changes when robots look more like humans. This is because humans and robots interact morally. This is the book that made the Three Laws of Robotics famous. They were a set of rules that shaped how robots were shown in different media.

2. The Hitchhiker’s Guide to the Galaxy by Douglas Adams

In the beginning, the Hitchhiker’s Guide to the Galaxy was a radio show. It quickly became a favorite of nerds. This geeky book takes the reader on a journey through the universe in search of the ultimate answer to everything. Life, the universe, and everything are all part of the same thing. People who like weird, crazy scientists will enjoy this book.

Vogons, an alien species, destroy Earth to make way for a space bypass. Arthur Dent is left homeless (and without a planet). Then, things get a little out of hand. There are a lot of different alien cultures, crazy characters, and, of course, lunch at The Restaurant at the End of the Universe.

3. Ready Player One by Ernest Cline

People who like geeky movies and geeky books will like Ready Player One. It is set in the OASIS, where everything is possible and you can be anyone you want to be. In itself, the setting is like a nerd’s fantasy. There are places filled with magic, robots, dragons, and every other nerdy fantasy you can think of.

Wade Watts is the typical teen. At home, he lives with his aunt and goes to school at the OASIS. When he has time, he studies pop culture from the 1980s and 1990s to find out more about the OASIS creator’s deathbed Egg Hunt. When he finds the first clue, everything changes and he becomes famous all over the OASIS.

If you look at Time magazine, Snow Crash is one of the best English-language novels that have been written since 1923. It’s a difficult but interesting book that talks about history, linguistics, computer science, politics, and philosophy. Using the term “avatar” to describe online virtual characters and the idea for Google Earth are two things it is said to be responsible for.

Hiro’s Protagonist works for the mafia as a hacker and a pizza delivery man. This is how it works: Hiro decides to look into and get rid of a computer virus that he thinks can infect and control humans.

5. Gardens of the Moon by Steven Erikson

Malazan’s first book, Gardens of the Moon, is an epic dark fantasy that has a lot of military themes. Because Malazan’s world is rough, it doesn’t fall into grimdark or nihilism, but it isn’t kind. Even though the book is hard to read because of a lot of in-the-moment scene-setting and complex worldbuilding, the payoff is huge as you read it.

It’s about the Malazan Empire taking over Pale and Darujhistan, as well as the Bridgeburners, a legendary group of soldiers. Subplots involving specific characters, gods, and a lot of backstabbing and backroom planning work together with the main plot to make a story that’s hard to put down.

6. The Color of Magic by Terry Pratchett

Discworld’s first book, The Color of Magic, has been a favorite of nerds for a long time. This is a geeky book that makes fun of fantasy tropes and subgenres, but it also talks about important issues like racism, religion, business, and politics.

Rincewind is a cynical wizard who doesn’t have the skills or desire to be a hero. Then, after a series of events, he gets to know Twoflower, an insurance clerk from a powerful empire who is very kind. They set off on a journey, not knowing that the gods of the Discworld’s board game are going to read about it.

Jules Verne was years ahead of his time when he made the Nautilus, a terrifying submarine that looked a lot like modern ones. Technology like Captain Nemo’s diving gear, electricity, and the submarine was either not around or in its infancy when the story was written. 20,000 Leagues Under the Sea is thought to be one of the best works of science fiction ever written.

Professor Pierre Aronnax and his colleagues have been imprisoned on the Nautilus, which Captain Nemo built and is in charge of, so they can live in exile from the rest of the world. The book tells about their adventures and mishaps, as well as their escape and returns to society.

Brave New World is often compared to George Orwell’s 1984, which is about a society where reproduction and social class have become like an assembly line. Some people are raised to think that they are better than other people, while others are forced to do their jobs and take medicine to stop them from feeling bad.

The story follows several people as they try to adapt to a new way of life that has been put in front of them. Bernard is a psychologist who is Alpha, but he has low self-esteem because he is short. One of the 30 percent of women who are not sterilized is “fetus technician” Lenina. She is promiscuous and attractive, and one of the 30 percent who is not. John is a savage because he grew up on a “Savage Reservation,” which has a lot in common with modern indigenous cultures in the United States.

Dune is thought to be a “gateway” book into the world of science fiction. A feudal interstellar society is shown in the future, where the rich and powerful control fiefs that cover the entire planet.

Paul Atreides and his family have been given the job of looking after the planet Arrakis. Arrakis is dangerous and unfriendly, but it is the only source of a drug that extends life, improves mental abilities, and is important for space navigation. Arrakis’ stewardship turns into a dangerous and sought-after job. The book tells the stories of people from different political, religious, technological, and ecological groups who are fighting for control of Arrakis and the drug.

Neuromancer is one of the most important works of cyberpunk literature. It talks a lot about how technology and the human body can work together. When this book came out, it was nominated for the Nebula Award, the Philip K. Dick Award, and the Hugo Award, which is something that was never done before at the time.

It happened because Henry Dorsett’s Case got caught stealing from his boss. As punishment, he couldn’t get into the “matrix,” a virtual reality data space. He accepts an assignment to fix his central nervous system, which sends him into a world of murder and sleight of hand.

These are only a few of the geeky books that are out there. If you’re looking for more, try checking out online bookstores or your local library. And, if you have any suggestions, feel free to leave them in the comments!

Where Is The Minecraft Museum?
Whose Middle Finger Is In A Museum?
5 Best Geeky Dates Ideas

How Much Does A Structural Engineer Make?

Here’s How To Play Letter Jam