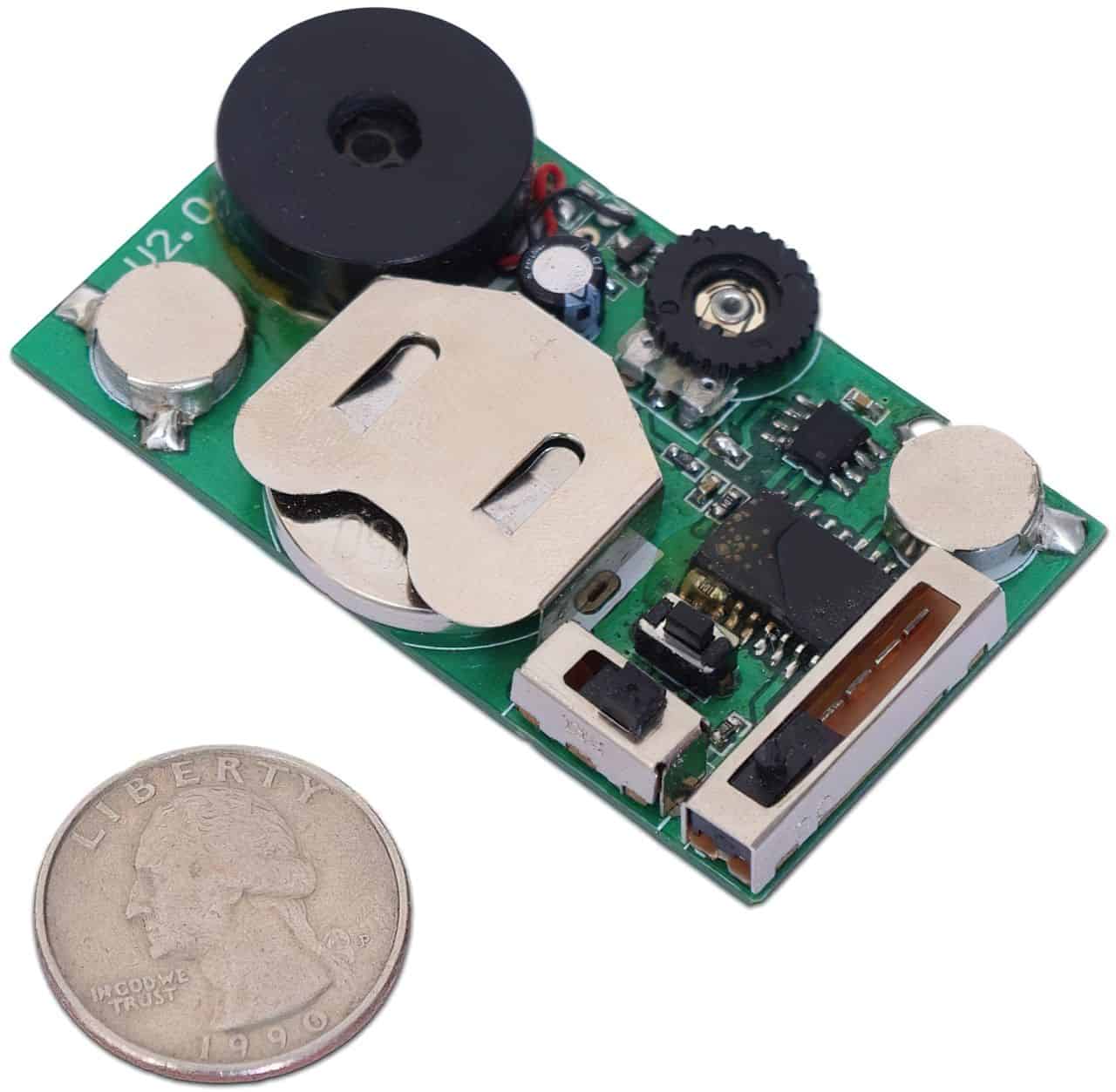 It’s simple: annoy the hell out of my co-workers. For this to work, I needed a gizmo that was going to drive people crazy remotely, without me having to actually put in much effort. Fortunately, I stumbled across the Annoyatron 2.0 from Think Geek. It’s like a little motherboard covered in electronics, jumbled together to form one of the most infuriating devices in existence. It’s perfect.

This little guy – the Annoyatron – is so aptly named and deserves his own introduction. My guy features 6 new choices of relentlessly annoying noises, and a volume control knob which was turned all the way down for discretion’s sake. It didn’t stay that quiet all day, but that’s where I started with it. It’s got a 15 kHz mosquito tone, a 12 kHz electronic noise, or a beep, a cricket, and so on. You can even make it alternate between the sounds but I’d rather just alternate between them per day.

Oh, by the way, this was not a day plan. This went on for weeks. That’s how you drive your co-workers absolutely crazy. Especially since some of the sounds aren’t audible to most adults, so a lot of my co-workers were actually playing along with not being able to hear the Annoyatron without realizing.

First, I needed to find somewhere where I could reach the ears of the co-workers I disliked, all whilst making the Annoyatron impossible to locate. Under their desks? That would make sense for a beeping sound or a critter to be, but when people are annoyed, they don’t think with their heads. With that thought in mind, I knew I could get more creative with where I hid it since nobody’s going to question why the sound is coming from where it’s coming from. Sort of like a car alarm: people just want the annoying noise to stop, rather than realizing that there’s probably a car theft going on nearby.

Perhaps inside one of their desktop computers? No, someone would open it and find it. That’s when I had the idea to open one of the ceiling panels, and access the ventilation system. All the spies crawl through there. It was so simple yet so eloquently brilliant. Plus, it would spread the sound around and mask it a little easier.

At the beginning, the sound was a low beeping sound every few minutes. Perhaps a distant door that people were walking through. A metal detector? Security checks? Nobody thought twice about it since there is often construction going on in the building from new contractors. A couple weeks went by, and I turned the volume up slightly. Late in the week, I spotted a co-worker raising her eyebrow and tilting her head to the side for a couple seconds. Then the moment was gone, and suspicion had passed. It was working just as planned.

As spring turned to summer, the ventilation system was frequently in use, so I was able to turn the Annoyatron even louder without people realizing that it was on. At this point, I had changed the sound to a cricket, only every five minutes. Some complications ensued due to it becoming more obvious. For example, you may be asking, how did I change the batteries? Well, that’s what the pandemic was for so I could keep everyone at home. Just kidding, I just did it whilst the people working near it were on their breaks. But I was never seen, so that’s good. Was I heard, though?

No, I was not heard in that process, but the cricket noises were starting to be heard every morning. The first “does anyone hear that?” provoked a smirk from me, indicating my obvious involvement, but that co-worker isn’t fond of me either, so he was likely not to be eyeing my direction. I heard a frustration in his voice, and it didn’t sound like the first time that the Annoyatron had been complained about. Must have missed the first instance of complaint, but this was still a great feeling, to know the Annoyatron plan was in full motion with no hint of slowing down.

Fast forward a month, and the Annoyatron, above the office’s Karen squad has made two of them quit their jobs! Okay, one of them asked for a transfer to another department, and the other is on maternity leave but I doubt she’ll want to come back. Either way, I’m counting that first one as an absolute win! The doorbell noise is suspiciously similar to our department’s announcement ding, so we’ve had a lot of frantically confused faces when there’s a ding with no voice to follow.

So, after using this toy – actually, I probably wouldn’t consider it a ‘toy’; it’s more like a mental guillotine – for just over a month, the results are spectacular. The frustration that has been caused is virtually impossible to be traced back to me, and this may be the pettiest thing I’ve ever accomplished. But an accomplishment is an accomplishment, and I can now work in peace without listening to an equally frustrating noise of the Karens’ mouth breathing, loud eating and complaining.

1 thought on “Annoyatron: The Holy Grail of Pranks”