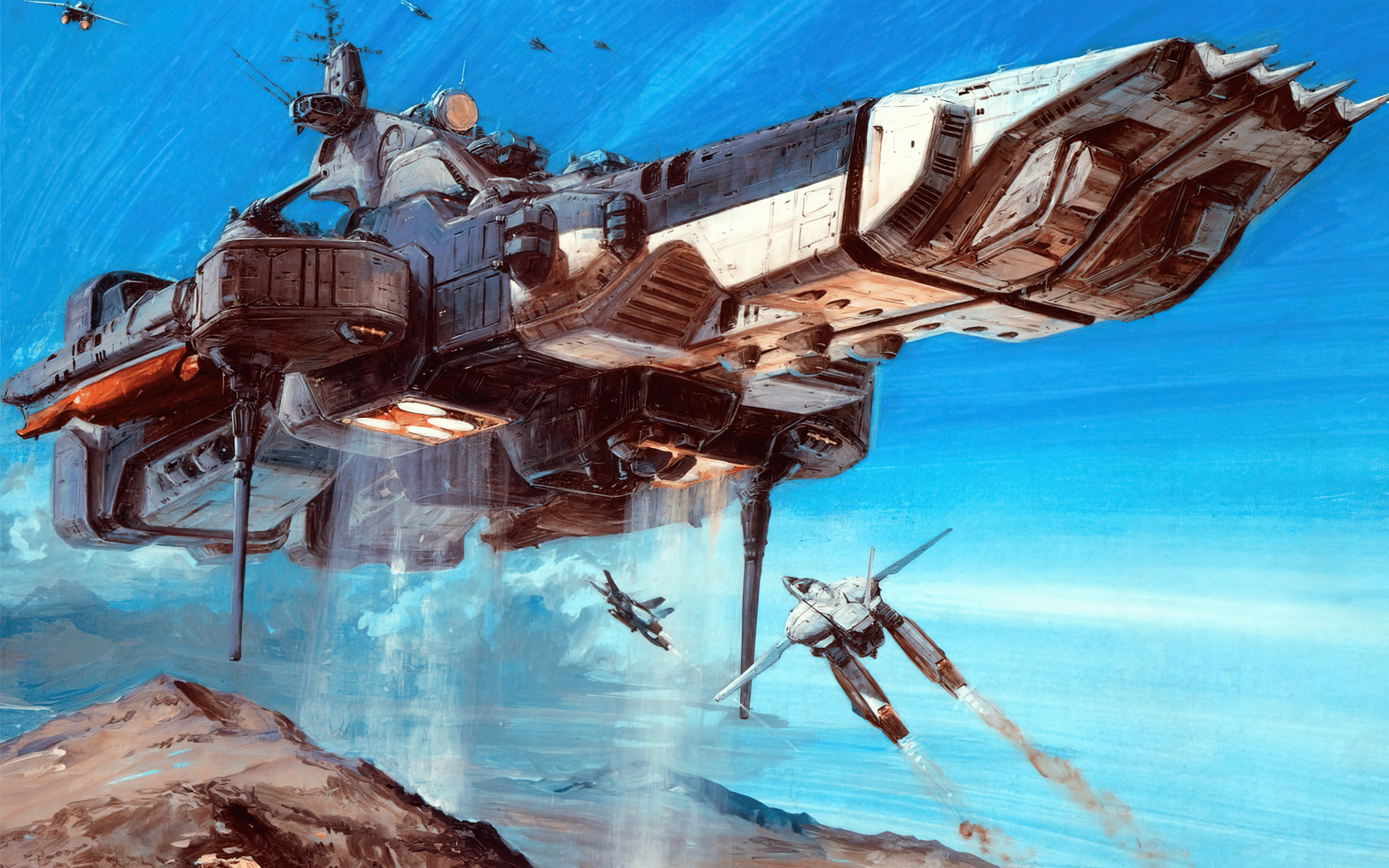 Fiction is fantastic, and these anime spaceships will blow your mind

They might not be the Apollo or even other science fiction spaceships like an X-Wing or a TARDIS, but they have plenty to offer on the landing strip and in the air. Animation allows for many excellent ideas and designs that may not even be possible from a technical standpoint for live-action sci-fi.

So here’s why anime spaceships are fantastic and our top 5 favorite ships. If this is your first time watching any anime, this list will surely excite you for some fantastic space adventures.

Which are the best anime spaceships?

The Outlaw Star is a unique and fascinating anime spaceship, iconic for its grappler arms specializing in firearms and melee weapons. The arms are entirely customizable additions, typically found on Space Pirates and Space Force spaceships. Alone, the arms are sufficient in the event of battle with other ships and can be armed with a knife and a large machine gun, as pictured. The Outlaw Star has at least five guns: one underneath its ventral body, two on its dorsal surface, and two more on the starboard side and forward port. Not to mention the outfitted missile launchers on its port, starboard front portion, and midsection – however, they are rarely used given the cost of missiles in this universe.

The Outlaw Star is formally known as the XGP 15A-II, but that doesn’t quite sound as cool. It was created by Gwen Khan, the Kei Pirate Guild, and the Space Forces. The state-of-the-art spaceship was designed to enter the Galactic Leyline – the universe’s biggest treasure. After some classic thieving and stealing, the Outlaw Star found its way into the possession of Gene Starwind and his crew.

The Grappler ships are a work of art, and the Outlaw Star is an excellent example. Its design, customization, and weaponry make it a top-notch choice for any outer space pirate or treasure hunter.

#4: Sidonia from Sidonia no Kishi (Knights of Sidonia)

This massive, well-armored interstellar seed ship and Guardian carrier is the series title for a reason. The Sidonia is the last known remnant of humanity and is a large transport ship protecting human culture and all of humanity. Approximately 5 kilometers wide and

It may look like a vast suppressor, but the guns on this thing are anything but silent. Well, metaphorically, since sound doesn’t travel in space, you get the point. The Sidonia is equipped with Guardians (large mechanized weapons); a heavy mass cannon; anti-planet missiles (you heard right, but they’re mainly used to destroy asteroids in the way); and a main railgun with the most immense recoil you will have ever seen since it spans almost the entire ship.

This ship is a highly influential anime spaceship, reminiscent of an Imperial Japanese Navy battleship sunk in the East China Sea late in the second world war. It is one of the same massive ships, except this time with a giant laser cannon. This Yamato is a United Nations Cosmo Navy space battleship and was originally an evacuation ship for survivors fleeing the Garmillas-Earth war; now tasked with the more ambitious plan to save all life on Earth from extinction.

The Yamato is accustomed to the seas and can easily take off from the water. The Yamato is the Earth’s most formidable warship at the time of its launch in 2199, with shock cannon turrets; missiles, and torpedo launchers in every direction; rapid-fire anti-aircraft batteries on the port and starboard sides; and, of course, the famous wave motion gun at the front which yields massive destructive capabilities. I put this as #3 because it’s less popular, but this is secretly my favorite anime spaceship because of the gigantic, foreboding design.

There isn’t much to be said about this awesome anime spaceship. It contains a city with its own culture and people and even transforms into a large robot that fires giant laser cannons. The SDF-1 Macross is a ship, and a mecha, constructed from the wreckage of a crashed alien vessel.

Its shields are pretty complicated, but in layman’s terms, the Macross engineers discovered a distortion in the space-time continuum in the section of the ship that was lost during a jump to Pluto. The shield is controlled in a pin-point barrier design to target specific regions of the ship at different times, as the Macross is too large to be wholly shielded at once.

#1: White Base, from Mobile Suit Gundam

The Universal Century timeline in the Gundam universe brings the SCV-70 White Base to your screen. Developed by the Earth Federation, this is a Pegasus-class mobile suit carrier, equipped with a twin 560mm two-barrel cannon; a twin mega particle cannon; 8 missile launchers (two on the inside and outside of the front legs); a rear missile discharge device; and lastly a twin 40mm AA/AMS gun.

The White Base’s registration name was unknown through the first part of the One Year War, at least to the Principality of Zeon forces. Due to that fact, White Base was referred to as the codename ‘Trojan Horse.’ The equine shape is likely to be the reason for this and the considerable defensive and destructive capabilities that its armaments behold.

White Base takes our number 1 spot because it is a ship that influenced many – if not all – of the other anime spaceships from the Gundam franchise and other franchises. It is the most powerful ship belonging to the Earth Federation in the One Year War and carries the audience’s guide through the war with a group of relatable kids.

Bonus: The Bebop, from Cowboy Bebop

This is a bonus since it’s not exactly an anime spaceship but more of a spacegoing vessel. The Bebop is a converted fishing trawler owned by the protagonists of Cowboy Bebop, Spike Spiegel, and Jet Black. It’s equipped with two laser cannons, two missile launchers, and other various defenses, making it a formidable opponent in a fight.

The Bebop is also equipped with a hyperspace gateway drive, allowing instantaneous travel to any location in the galaxy. While this isisn’tnique to the Bebop, it is still a pretty excellent addition that makes it stand out from other spaceships in anime.

Do you have any favorite anime spaceships we dididn’trite about?

There’s a nearly endless catalog of Japanese cinema to watch, with exciting content spanning every genre from Westerns to Sci-Fi anime, and you can probably tell where my heart is at. I’m a sucker for anime spaceships, but what about you?

Do you have a favorite one that we haven’t talked about here?

Angle Grinder Man: The True Story of the Mysterious UK Superhero Who Removes Clamps from Cars

How to Spot A Gamer: Signs That Someone is a Hardcore Gamer