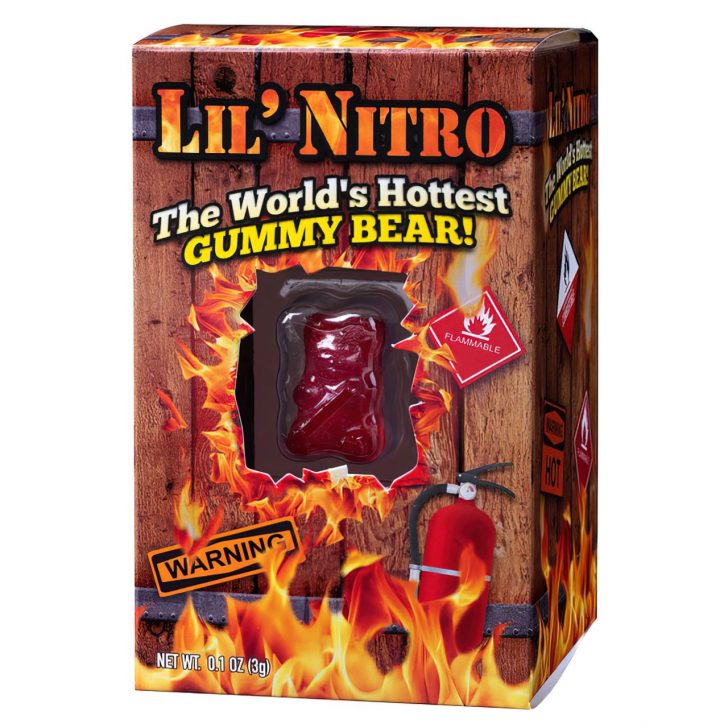 That’s the name of the world’s hottest gummy bear. That’s right, all that heat is packed into this tiny lovable package. This little guy reaches up to 9 million Scoville Heat Units, which equals 4 times the heat of the world’s hottest chili pepper. It’s also around 900 times hotter than the spiciest jalapeno. Which is, with lack of more scientific terms, pretty freakin’ scolding hot.

This dynamite level gummy bear gets shipped to your home complete with an ice pack, and a CoolShield foil wrap to assist with your possible loss of temperature comprehension. The highest of caution is advised for this seemingly harmless gummy bear that will not satisfy a sweet tooth in the way you think.

Spice Up Your Senses

My experience with Lil’ Nitro was not like most, because I didn’t actually try it. It was a gift to a friend of mine who actually had no sense of taste or smell. It has its disadvantages, sure, but they weren’t very picky about what they ate. Although, one way they were able to experience taste was by eating spicy food. For scale, extremely hot jalapenos barely had any taste, according to my friend. Fear not though, the world’s hottest gummy bear was on the case.

The gummy bear was split up into several pieces, and my friend had the head. The feet alone were enough to make others need to furiously down glasses of milk to cool themselves off. But my dearest friend – whom I needed to suffer because otherwise why would we be friends? – took a bite out of the world’s hottest gummy bear and received a burning sensation like no other. His face blew up bright red, and his tongue shot out in a need of water, or milk, or just something to end the suffering.

Success! Given the nature of Lil’ Nitro’s excellent desire for horror within the mouths of even those without senses, the effects of an arm, or even just one toe would be devastating. Now, I’m not saying not to get it, I’m just saying don’t be the one to try it. See, I gave it to my friend knowingly so that he could test it out. However, on an unknowing subject, it could be the perfect prank. Offering a bag of gummy bears with one or two being one of the hottest foods on the planet is an easy way to gain a friend’s trust, and then immediately lose it along with your friendship. Worth it in the short run for sure.