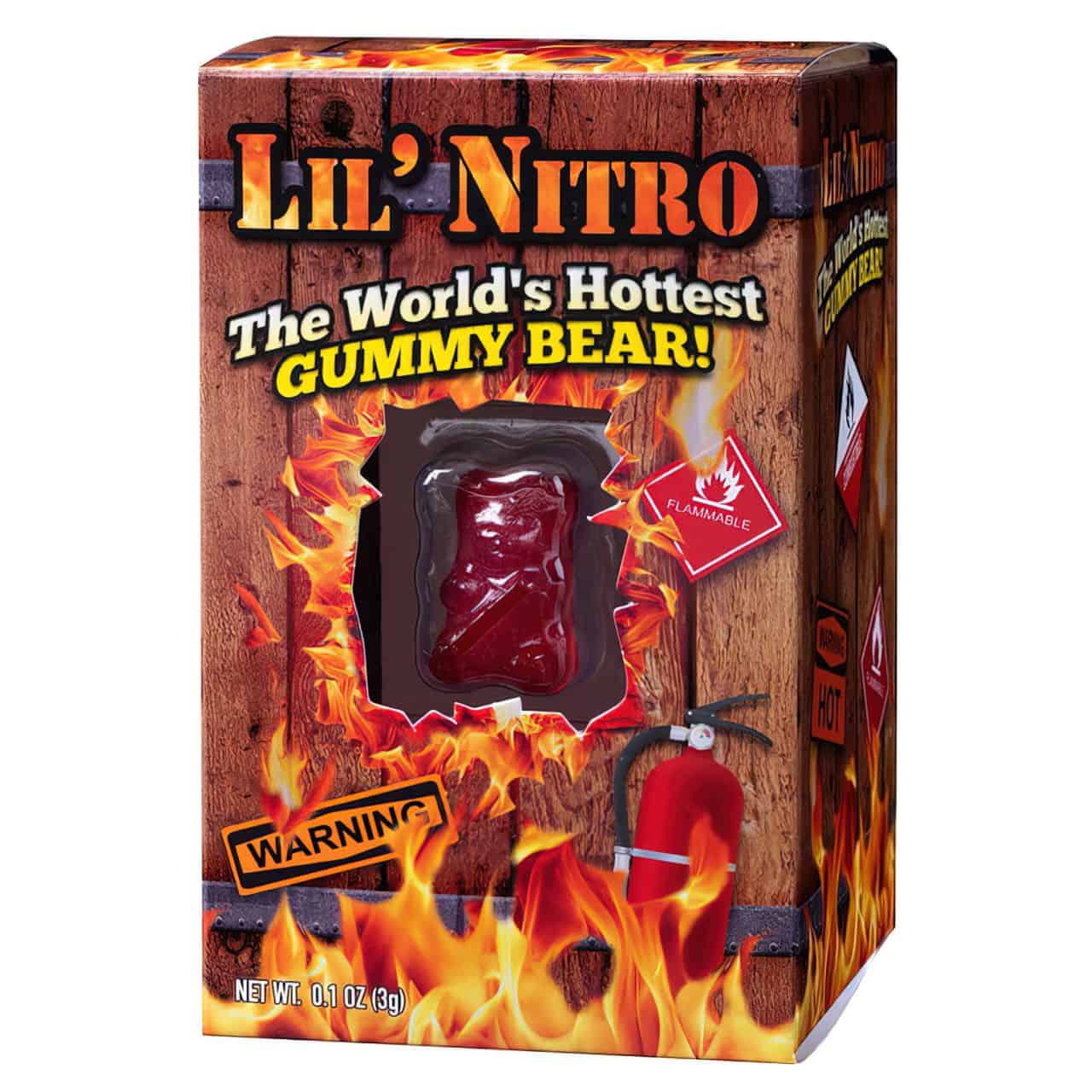 That’s the name of the world’s hottest gummy bear. That’s right, all that heat is packed into this tiny lovable package. This little guy reaches up to 9 million Scoville Heat Units, which equals 4 times the heat of the world’s hottest chili pepper. It’s also around 900 times hotter than a jalapeno pepper. Which is, for lack of more scientific terms, pretty freakin’ scolding hot.

This dynamite-level gummy bear gets shipped to your home complete with an ice pack, and a CoolShield foil wrap to assist with your possible loss of temperature comprehension. Extreme caution is advised for this seemingly harmless gummy bear that will not satisfy a sweet tooth in the way you think.

Seriously, take this at your own risk.

Spice Up Your Senses

My experience with Lil’ Nitro was not like most, because I didn’t actually try it. It was a gift to a friend of mine who had no sense of taste or smell. It has its disadvantages, sure, but they weren’t very picky about what they ate. Although, one way they were able to experience taste was by eating spicy food. For scale, extremely hot jalapenos barely had any taste, according to my friend. Fear not though, the world’s hottest gummy bear was on the case.

The gummy bear was split up into several pieces, and my friend had the head. The feet alone were enough to make others need to furiously down glasses of milk to cool themselves off. But my dearest friend – whom I needed to suffer because otherwise why would we be friends? – took a bite out of the world’s hottest gummy bear and received a burning sensation like no other. His face blew up bright red, and his tongue shot out in a need of water, or milk, or just something to end the suffering.

Success! Given the nature of Lil’ Nitro’s excellent desire for horror within the mouths of even those without senses, the effects of an arm, or even just one toe would be devastating. Now, I’m not saying not to get it, I’m just saying don’t be the one to try it. See, I gave it to my friend knowingly so that he could test it out. However, on an unknowing subject, it could be the perfect prank. Offering a bag of gummy bears with one or two being one of the hottest foods on the planet is an easy way to gain a friend’s trust, and then immediately lose it along with your friendship. Worth it in the short run for sure.

The company that makes it is called the Flamethrower Candy Company and is based out of the United Kingdom.

Is there an actual bear in it?

No, there is no real bear. It is simply named after it resembles a gummy bear.

How many Scoville Heat Units are in the world’s hottest gummy bear?

What is the Scoville Scale?

The Scoville Scale is a measurement of the pungency (spicy heat) of chili peppers. The higher the Scoville units, the hotter the pepper.

What’s the difference between a jalapeno and the world’s hottest chili pepper?

What should I do if I eat the whole thing?

Drink milk or lots of water. Try to cool your mouth off as much as possible. Do not drink alcohol as it will make the burning sensation worse.

What is the world’s hottest chili pepper?

As of February 2017, the world’s hottest chili pepper is the Carolina Reaper.

How many times hotter than a jalapeno is the world’s hottest gummy bear?

Lil’ Nitro is around 900 times hotter than a jalapeno pepper.

Lil’ Nitro is around 4 times as hot as the world’s hottest chili pepper.

What should I do if I want to try the world’s hottest gummy bear?

You should probably just buy one.

The challenge is to eat a single gummy bear in one sitting. If you can do it, you get a free t-shirt from the company. It’s the worst spice game imaginable, like trying to swallow a stick of dynamite.

But hey, at least the rules of the challenge aren’t complicated.

How long does the burning sensation last?

It depends on how much you ate and how spicy your food tolerance is, but the burning sensation should last around 30 minutes to an hour.

Can eating one of these cause mouth irritation?

Yes, it is possible to experience mouth irritation from eating the world’s hottest gummy bear. This can happen if you have a sensitive stomach or if you eat too much of the gummy bear at once.

Can I get food poisoning from this?

No, you cannot get food poisoning from eating the world’s hottest gummy bear. The gummy bear is made with all-natural ingredients and does not contain any harmful bacteria.

Should I keep this out of reach of children?

Yes, you should keep the world’s hottest gummy bear out of reach of children. This is because the gummy bear is very spicy and can cause mouth irritation.

Should I eat one if I’m heat-sensitive?

No, you should not eat one of the world’s hottest gummy bears if you are heat sensitive. As a general rule of thumb, if you can’t handle spicy foods, skip this.

The Tracer Gun is Back: Dream Toys of the 1980s

How to Help Your Mom Buy a Computer: The Ultimate Guide