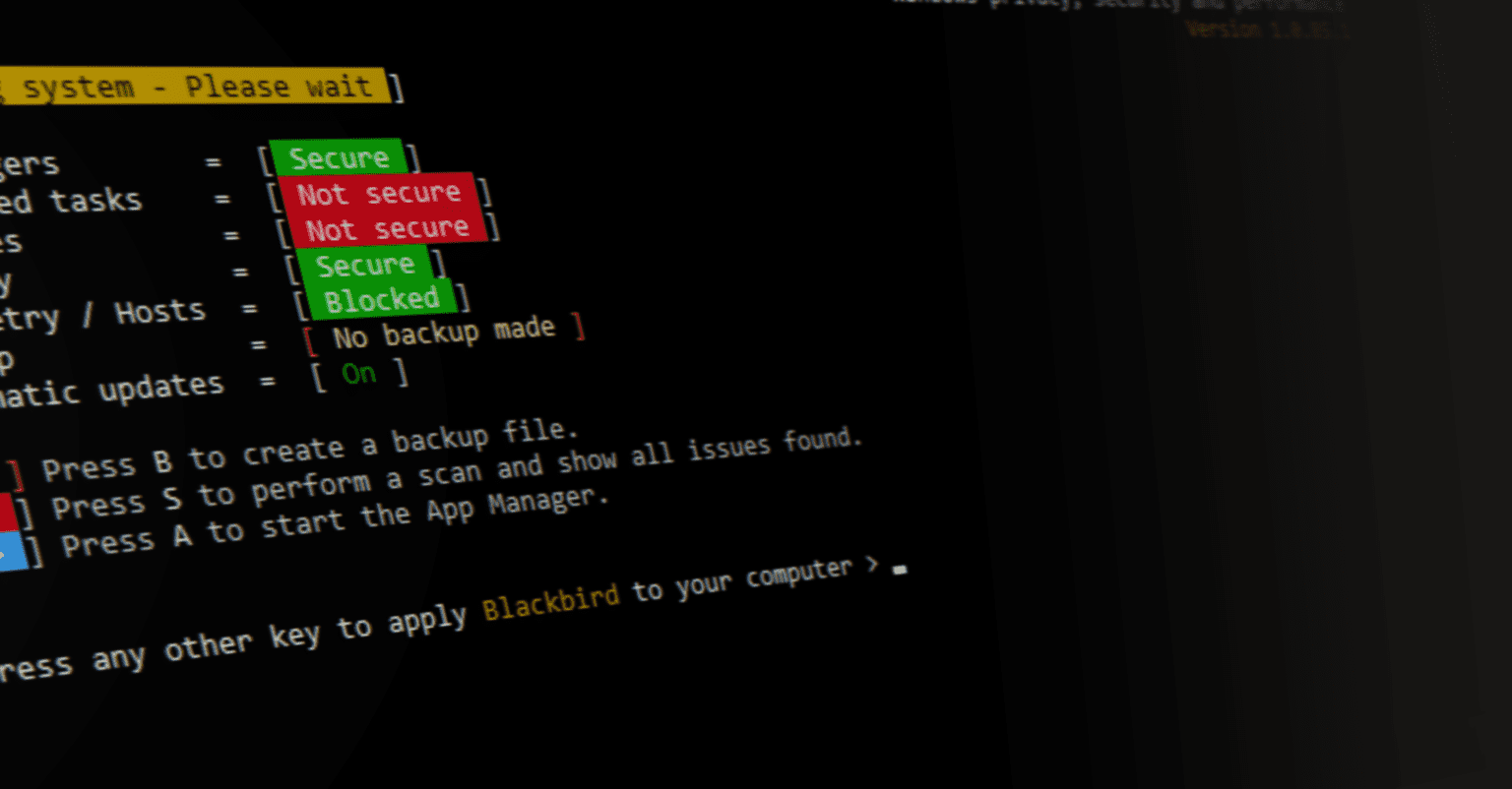 One of the first things I do when I start with a fresh install of Windows is to download a copy of Blackbird and turn off the massive amount of spy features enabled by default.

Blackbird is essentially a simple tool that allows an average person, with only basic computer skills, to disable a lot of this nonsense with ease by following a few straightforward prompts and using just a little bit of common sense.

I’ve been using Blackbird for years now and asked The Dev if he would be so kind as to answer a few of my questions about himself and the project.

So here’s our conversation…

An interview with the Blackbird Dev

So, what’s your story? I’m assuming you have a background in computer security…

Just a high-school dropout pothead that likes to f*ck around with computers.

What made you decide to create Blackbird? Was this mostly scratching your own itch, or was the intention to help other people?

Honestly, it all started when I just wanted to relax and blast some music on my PC but instead was greeted with a “Get Windows 10” prompt that wouldn’t go away.

Was having a rough couple of months at the time and for some reason, this pissed me off to no end. An overblown reaction of a camel to that one straw, really.

The website came later when I figured someone else might find it useful and I could learn more about Windows along the way.

But I would have stopped a long time ago if it wasn’t for the positive feedback from people all over the world, that’s what keeps me going.

I even met and became close friends with some of them, I wouldn’t trade that for anything.

How bad is Windows really in terms of privacy? Anything in particular that you think would really surprise people?

An operating system’s job is to do what the user tells it to do and wait for further instructions. It’s explicitly not its job to do whatever is good for the company that made the OS while ignoring user input and wasting resources.

Personally, I’m continuously surprised at the sheer amount of data Windows constantly keeps collecting and sending off to some unknown servers, or how every major update makes it a bit more difficult to disable everything. It sucks how quickly people forget about stuff like PRISM.

You can probably find VeraCrypt, uBlock Origin, and Palemoon on all of my Windows setups. Nmap, Fiddler, Wireshark, and Process Hacker also come to mind.

I don’t really follow any projects, it’s just a matter of using the right tool for whatever needs to get done, sometimes that means building your own.

Blackbird isn’t open source. What was your thinking behind that decision?

True, it’s not officially open source, mostly because dealing with pull requests, issue reports, forks and whatnot just doesn’t sound that fun to me. Partially because I’m self-critical AF.

Anyone can view the code though, it’s just a fancy script packed inside an executable.

I think I know the answer to this question, but I would love your take: are things moving in the right direction in terms of personal privacy?

Why would they? There’s no profit in increasing privacy and most people don’t seem to care anyway. Ask the same people for all their passwords and they won’t give it to you though, it’s almost funny.

What worries me is mass data collection becoming systemic, and now you can’t get medical insurance because you searched for “lung cancer symptoms” too many times. A dumb example but you see where I’m going with this.

What else can the average person do to protect their privacy online?

Use encryption/Linux and host your own personal emails. I’d avoid VPNs, they have to keep a log of all traffic by law and they’ll never risk their business to protect the privacy of a single user when faced with a warrant.

Install a good ad-blocker in your browser and allow javascript only on trusted sites. Use different passwords and fake/gibberish answers to security questions, I’d even argue against using 2FA.

Don’t use biometric authentication for anything important and don’t connect to unknown wifi networks. Apps banned in Russia/China usually use proper end-to-end encryption and don’t keep logs, that’s a good place to start.

Have you ever gotten any threats or strongly worded letters for having created Blackbird?

Not exactly. These things are never done in writing, leaving a neat paper trail of evidence.

What happens is you get pushed out by the big boys and their partners by being labeled as malware.

I had a lot of problems with the site being flagged as “Unwanted software”, so most browsers that “block dangerous and deceptive content” by default, would display a huge red warning page to all visitors.

Somehow Google is in charge of that list and won’t let you appeal or request a review without also having a Google account. They get really butthurt if you block their ad servers, apparently.

What does the future of Blackbird look like? Any exciting new features that you want to tease?

Haven’t given it much thought, to be honest. Did some experimenting with an actual GUI while also keeping the CLI side of Blackbird intact but mostly I’m just winging it.

Not much of a roadmap-making kinda guy, more of a gladly burn my life to the ground over the dumbest shit just to see the other guy lose kinda guy.

So I can only promise what I’ve always promised; to never take the website down, to never run ads, and to remain a free product.

Review of the Desk Mats from Agile Cables