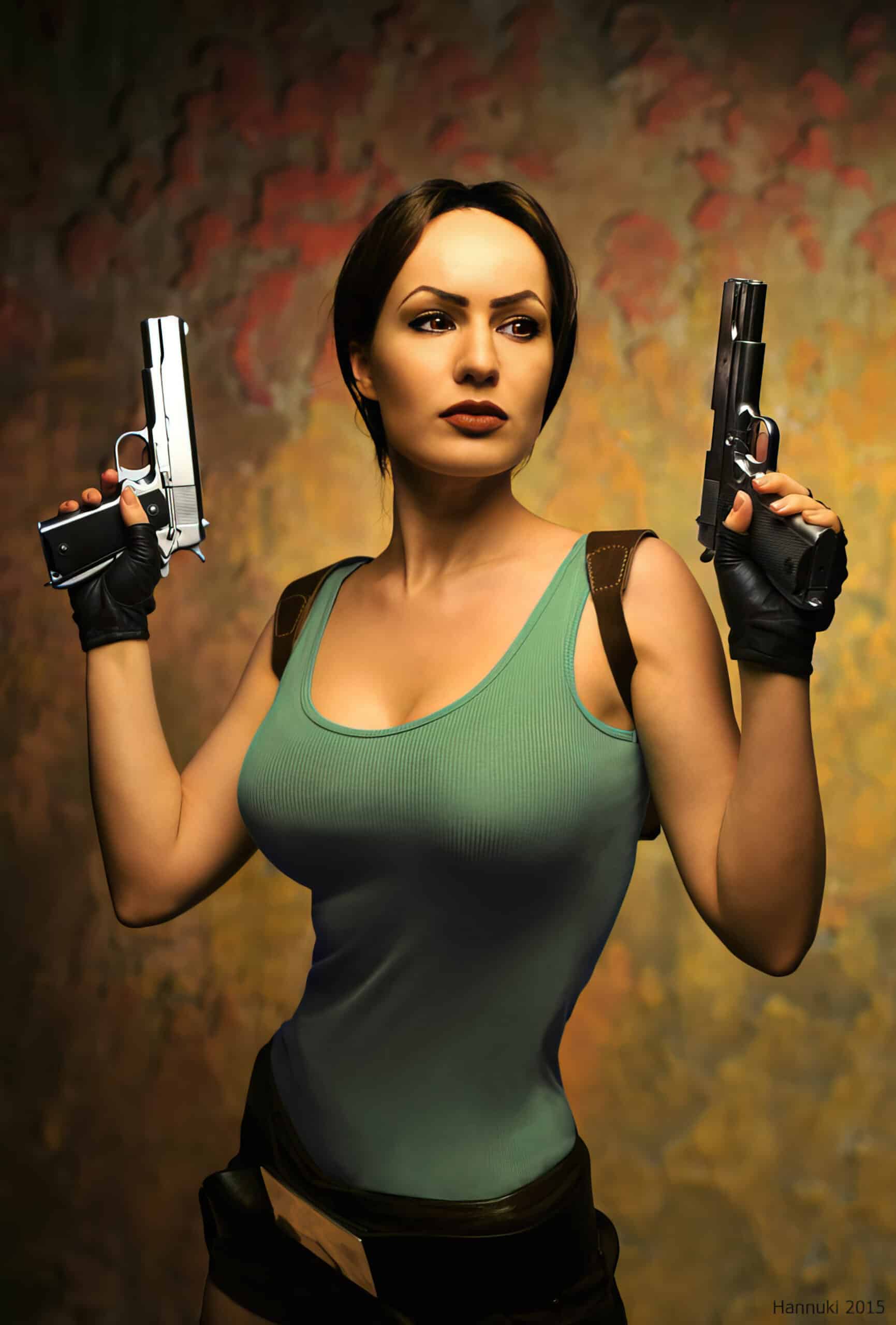 Lara Croft is one of the most popular video game action heroines of all time. She’s been around since 1996 and has starred in dozens of games. Cosplayers love to dress up as Lara Croft because she’s a strong and independent woman who can take care of herself in any situation.

This article will showcase some of the hottest cosplay pictures of Lara Croft I’ve found. I’ll also include fun facts about the Tomb Raider games and movies.

And for those of you that have (somehow) never heard of the character, I’ve written a brief introduction.

Who is Lara Croft?

Lara Croft is the main character of the Tomb Raider video game franchise. She’s an English archaeologist and explorer who travels the world looking for ancient artifacts and treasures. Lara is a strong and independent woman who doesn’t need anyone’s help to escape a sticky situation.

The first Tomb Raider game was released in 1996 and was a huge success. It spawned dozens of sequels, spin-offs, and two movies starring Angelina Jolie and Alicia Vikander.

Many different actresses have portrayed Lara Croft over the years, but she’s always been a fierce and independent woman.

And after decades in video games and film, she’s firmly entrenched as a pop culture icon.

Why do so many people think that Lara Croft is the hottest female character in video games, even after all these years?

There are many reasons why people think Lara Croft is the hottest female character in video games. First of all, she’s got a fantastic body. She’s tall and fit with long legs, a tight butt, and big boobs. Secondly, she’s got an outstanding style. She always looks good, even when she’s covered in dirt and dust after raiding a tomb. Thirdly, she’s got a great personality. She’s intelligent, resourceful, and always ready for a fight. Lastly, she’s just plain old-fashioned hot.

It’s no wonder that so many lady geeks cosplay as Lara Croft. It’s also not surprising that she’s a fantasy girlfriend for gamers worldwide.

But that’s just my opinion. What do you think? Is Lara Croft the hottest female character in video games? Let us know in the comments below! But before that…

Check out these 29 of the hottest cosplay pictures of Lara Croft:

These are some of my favorite photos of people cosplaying Lara Croft. They’re in no particular order because I think it’s impossible to try and “rank” women like that, and they’re inspired by many different versions of Lara. You may recognize scenes from both the Shadow of the Tomb Raider and Rise of the Tomb Raider video games released by Crystal Dynamics and the movies starring Angelina Jolie and Alicia Vikander.

In other words, there’s a Lara Croft here for everyone.

In the early 2000s, a series of novels based on the Tomb Raider games were written by author Dave Gibbons.

The Tomb Raider series has sold over 45 million copies worldwide.

In 2007, Lara Croft was inducted into the Guinness World Records as the “most successful human video game heroine.”

Lara Croft is a British action hero who first appeared in the 1996 video game Tomb Raider.

Indiana Jones and James Bond-inspired the character of Lara Croft.

Lara Croft is the star of more than a dozen video games, as well as two movies.

Angelina Jolie starred as Lara Croft in the first movie, and Alicia Vikander took over the role in the second movie.

The original design for Lara Croft’s outfit was much more revealing than the final version.

Lara Croft is an accomplished pianist and speaks several languages fluently, including French and Spanish.

In the early games in the series, Lara Croft was voiced by actress Shelley Blond.

Cosplay by The Artful Dodger

Since 2013, the character of Lara Croft has been voiced by Camilla Luddington.

Lara Croft is one of the most popular cosplay characters of all time.

Lara Croft has been featured on the cover of magazines such as Time, Newsweek, and Rolling Stone.

Lara Croft is considered to be a feminist icon. She’s one of the strongest female leads of all time, next to characters like Ellen Ripley of Aliens and Sarah Connor of The Terminator.

Top Cow Productions also published a comic book series based on the games.

There have been two live-action movies starring Angelina Jolie as Lara Croft and a reboot starring Alicia Vikander.

The latest game in the series is Shadow of the Tomb Raider, released in 2018.

Several action figures and dolls made of Lara Croft over the years have been made.

Lara’s brown shorts from Tomb Raider III are now on display at the Victoria and Albert Museum in London.

What do you think of these cosplay pictures? Are these photos hot or not?

What makes for a sexy Lara Croft costume?

There is no one answer to this question since everyone has their own idea of what makes a sexy Lara Croft costume. However, some key features often appear in popular cosplays, including skin-tight clothes, short skirts, revealing tops, and lots of muscle definition. Additionally, many people choose to add props such as guns, grenades, and knives to capture the action-packed feel of the Tomb Raider franchise. Whatever your definition of sexy is, there is sure to be a Lara Croft cosplay out there that fits it!

What makes Lara Croft so hot?

This is another question with no definitive answer, but some popular theories exist. First and foremost, Lara Croft is a powerful and independent woman – she doesn’t need a man to save her; she can take care of herself. Secondly, her sex appeal is often amplified by her skimpy clothing and a large arsenal of weapons. And lastly, her British accent doesn’t hurt either! Whatever the reasons, there is no doubt that Lara Croft is one of the hottest women in gaming.

Why did Crystal Dynamics make the Tomb Raider franchise sexy?

The developers behind the Tomb Raider franchise have never explicitly stated why they made Lara Croft a sexy character. However, it is speculated that they did so to appeal to a broader audience. They hoped to attract more male gamers who would not usually play video games starring a female protagonist by making her an attractive character. Whatever the reason, there is no denying that Crystal Dynamics successfully made Lara Croft one of the sexiest women in gaming.

Who does the sexiest Lara Croft cosplay?

In my opinion, Irina Meier does the most realistic-looking Lara Croft. I wouldn’t call her the sexiest Tomb Raider, but her costume reads as most accurate to the games, and she’s still a hot Lara Croft. However, many other cosplayers have their own unique and sexy take on the character. Some of my other personal favorites include KonradM, Santatory, and Lili Din.

How can I create my own Lara Croft cosplay?

If you’re interested in creating your own Lara Croft cosplay, there are a few things you’ll need to consider. First and foremost, what style of Lara Croft do you want to cosplay? The character has many different versions, from the classic to the more recent rebooted look. Secondly, what kind of materials will you need?

For a more traditional cosplay, you’ll likely need some form-fitting clothing, props such as guns and knives, and maybe even a wig to capture Lara’s signature braid. However, for a more modern cosplay, you might be able to get away with just wearing some street clothes and using makeup to create the desired look. No matter what style you choose, be sure to have fun with it – that’s the most important part of cosplaying!

What are some of the sexiest Lara Croft moments?

There are too many to count! However, some of my favorites include the scene where Lara Croft first meets Roth in the 2013 reboot, the scenes where she is flirting with Jonah in Shadow of the Tomb Raider, and any scene where she is wearing her iconic shorts and tank top combo.

Lara Croft is one of the most popular video game characters of all time, and it’s easy to see why. She’s got a fantastic body, great style, and a personality that’s just as tough as she is. It’s no wonder that people love to cosplay like her.

And as contrived as this may sound, I think it would be a good thing to have more strong female characters in video games and movies. It’s pathetic how few there are, and I suspect that many men and women would be thrilled to see more of Ms. Croft and new intelligent, capable female characters yet imagined.

What are your thoughts on Lara Croft and cosplay? Have any other favorite video game characters that you like to see people cosplay as? Let me know in the comments; I’m always looking for new ideas. Thanks for reading!

Stop Having Sweaty Hands When Gaming: The Sweaty Gamer’s Guide