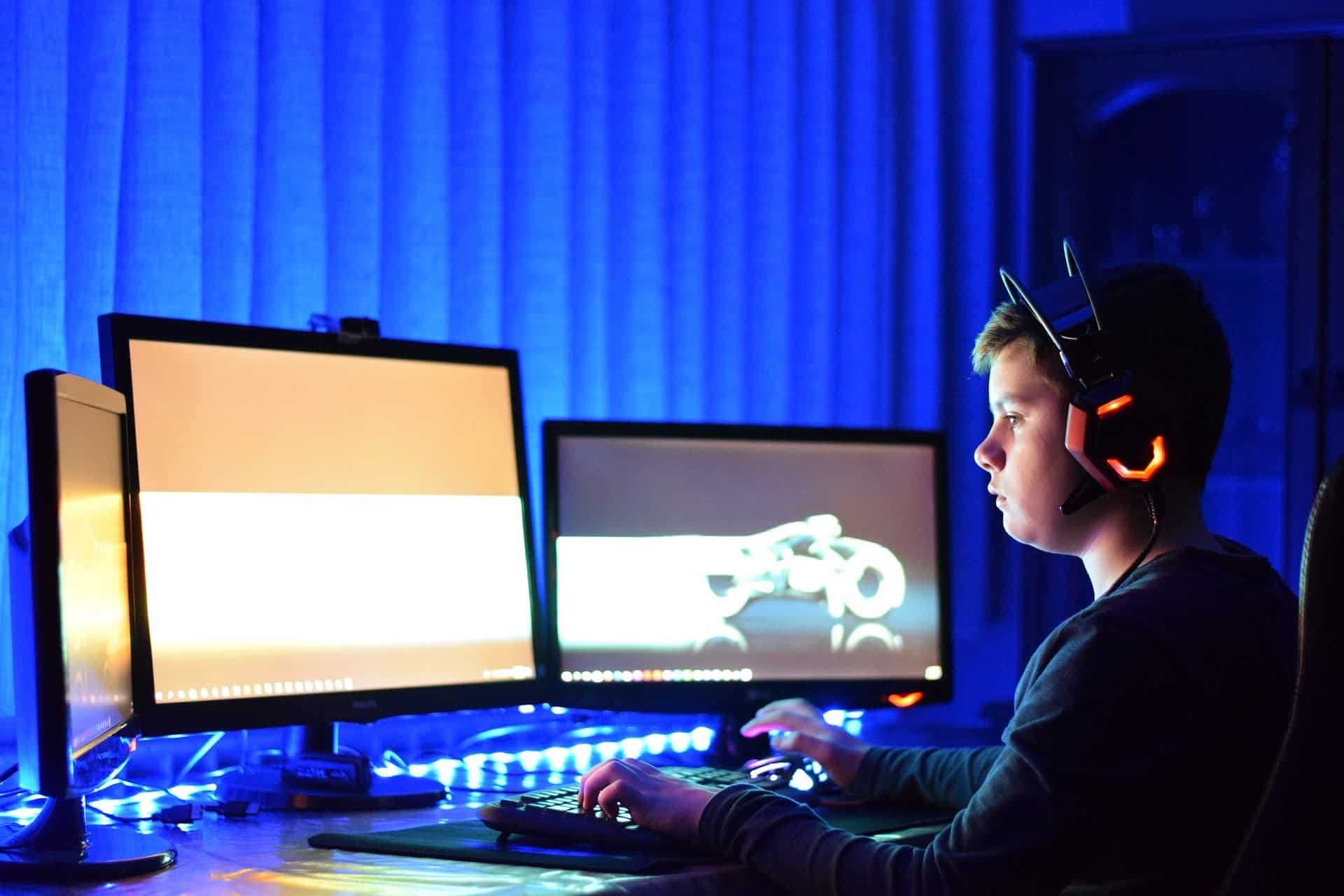 If you’re a PC gamer, then you know that having the right monitor can make all the difference in your gaming experience. But what size monitor for gaming?

Well, that depends on a few things. First, what kind of games do you play? If you’re mostly playing fast-paced shooters or other action games, then you’ll want a monitor with a high refresh rate. That way, you won’t miss a beat and your gaming will be smoother. So what size monitor for gaming will you need?

Another Interesting Read: What Is An Operating Engineer?

The 6 Best Monitor Sizes For Gaming

What Size Monitor For Gaming?

If you don’t know what all the marketing jargon and features mean, it can be hard to figure out the right side of the screen for gaming. What size monitor for gaming? With so many sizes and models to choose from, it can be hard to figure out which one is best for you. The resolution, the distance you can see, and even the games you play can help you make a decision. Because you’re not likely to only use the monitor for gaming, it’s important to think about how you’ll use it in addition to gaming when you choose the best gaming monitor size.

When it comes to the industry, bigger monitors are the norm. Smaller monitors, on the other hand, have many advantages and are popular for certain applications. Games can be played on 24 and 25-inch monitors, which have enough screen space. It’s easier to see everything in your field of vision while playing competitively, such as maps. If you want to play fast-paced first-person shooters, these monitors are the best choice. They won’t work well for games that need more immersion, like adventure or role-playing games. A smaller screen with the same resolution has more pixels per inch than a bigger screen with the same resolution, which makes text easier to read.

Almost all of the models in this size that we’ve looked at have a 1080p resolution. Because of the lower resolution, the graphics card doesn’t have to work as hard, which means that the frame rate can go up faster. Recent models can support refresh rates up to 360Hz, which makes playing games very smooth and responsive. What size monitor for gaming? A small 1080p screen can make it hard to be more productive, especially when you’re multitasking in split-screen mode.

The ASUS TUF Gaming VG259QM is our favorite 25-inch gaming screen. With the monitor’s great response time, fast-paced games look very smooth. It has a 240Hz refresh rate that can be overclocked to 280Hz. In addition, it has very little input lag, which makes it good for even the best esports players. G-SYNC compatibility has been certified by NVIDIA for compatibility with the most recent NVIDIA graphics cards, so you can get the most out of it, no matter which one you choose. For more ideas, check out our list of the best 24- and 25-inch monitors.

As far as 27-inch gaming monitors go, the ASUS ROG Swift PG279QM is the best one we’ve seen so far. It’s a great gaming monitor with a 1440p resolution and a mind-boggling 240Hz refresh rate that makes games feel more real. If you have an NVIDIA graphics card, you can use native G-SYNC support to get the most out of it. It comes with NVIDIA’s Reflex Latency Analyzer, which tells you how long it takes your PC to do things. DisplayPort: When it is connected, it is fully functional. When it is connected via HDMI, it can only run at 144 frames per second. Take a look at our picks for the best 27-inch monitors, as well.

If you need more space, a 32-inch gaming monitor is the best choice because it has a 16:9 aspect ratio. While this isn’t the most popular size, they have a lot of different options and a lot of different features, so there’s something for everyone to choose from. Because a 32-inch 4k monitor has a lot of pixels for work, it comes in 1440p and 4k resolutions. On this site, you won’t find many 1080p monitors with this many pixels.

As long as you can find a 32-inch monitor that fits your needs, it’s great. It’s great for games that move quickly because 1440p models have high refresh rates and quick response times that make them ideal. 4k models with high refresh rates are now available through HDMI 2.1 and DisplayPort 2.0. What size monitor for gaming? They require high-end graphics cards to be able to use them fully, so the majority of people should look at 1440p models instead.

The Samsung LC32G75TQSNXZA is the best 32-inch gaming monitor that we’ve tried out so far. Because of its high refresh rate, quick response time, and low input lag, this monitor is great for playing games. It comes in two sizes: 27-inch and 32-inch. Both of them have a native resolution of 1440p, which is the same for both of them. If you need more space on the screen, choose the 32-inch model. Both models are good for most games, but people who want a more immersive experience may find the 16:9 aspect ratio difficult to work with. Take a look at our picks for the best 28-32 inch monitors as well.

Ultrawide monitors have a bigger horizontal viewing area than 24-inch, 27-inch, or 32-inch monitors, but they aren’t as wide. It has a 21:9 aspect ratio, which makes the screen bigger on the sides while keeping the same vertical height. This means your eyes have to move side to side instead of up and down. If you want to work in an office, there are 38-inch ultrawide monitors with a resolution of 3840×1600 that can be found.

Ultrawide screens also let you open multiple windows side by side, which is good if you already have multiple monitors and don’t want to see the bezels. Another thing that makes ultrawide screens less ergonomic is that they can’t be turned into portrait mode. What size monitor for gaming? In addition, because gaming consoles don’t support the ultrawide format, it’s better if you play on a PC and your games can run on the screen at the same time.

The Dell S3422DWG is the best 34-inch ultrawide monitor that we’ve tried out so far. It’s a very good gaming monitor with a VA panel and a high contrast ratio so that blacks are black. It has native FreeSync and G-SYNC support, as well as a 144Hz refresh rate for a smooth gaming experience. It’s great for games that use HDR because it’s bright enough to make highlights stand out and has a wide color gamut. It moves well, but when there are a lot of fast-moving things around, some black smearing happens. We also have a list of the best 34-inch and bigger monitors.

For people who already have a lot of different monitors but would rather have just one, a super ultrawide monitor is the best choice. These monitors look a little weird, but they have an amazing 32:9 aspect ratio and a screen size of 49 inches, which is the same as two 27-inch monitors placed side by side. A bigger screen allows for a better resolution. What size monitor for gaming? It has a resolution of 5120 x 1440, which is the same as a 1440p screen but with more horizontal pixels.

This is because these ultrawide monitors are so big. To make the screen’s edges more visible, they’ve been curved. The stands, because they are so big, don’t provide much support for your body. You’ll need a big desk to fit it, and not all content is compatible with a 32:9 aspect ratio. This isn’t a problem if you’re running multiple windows side by side, but when you watch movies or play certain games, black bars will show up on the sides.

In our tests, the Samsung Odyssey Neo G9 is the best super-wide gaming monitor we’ve seen. It has Mini LED backlighting and good local dimming, which makes it great for gaming in low-light situations. It has a high-speed 240Hz refresh rate that is enabled by a DisplayPort connection, and its high peak brightness makes it great for HDR. However, to get the best HDR experience, make sure it has the most recent firmware version. HDR is too bright when it first comes out. What size monitor for gaming? Check out our top picks for ultrawide gaming monitors, then.

If standard 24-, 27-, or 32-inch monitors are too small, bigger ones should be looked at. It’s possible to play games on a 55-inch TV, but it might be too big for a desk. This is why monitor manufacturers are starting to make larger-screen monitors with screens of at least 40 to 50 inches. This is a list of 43-inch LED and OLED monitors that you can buy. There are also 48-inch LED and OLED monitors, like the Gigabyte AORUS FV43U. You won’t have to deal with black bars on the sides of some games like you would with an ultrawide because these sizes keep the 16:9 aspect ratio.

However, this screen size has a lot of flaws. What size monitor for gaming? They cost a lot and there are only a few models, but they are becoming more popular. If you don’t have enough space on your desk to move the whole monitor, it’s hard to share the screen with your friend for co-op games.

In our tests, LG’s 48 C1 OLED gaming monitor is the best large-screen gaming monitor we’ve ever seen or used. We used it as a monitor because that’s how it’s sold, and because its OLED screen produces amazing images. Individual pixels can be turned off to make pure, dark blacks that don’t look like they’re blooming around bright objects. You can play 4k games at a frame rate of 120 frames per second because it has a 4k screen and HDMI 2.1. In addition, it has low input lag and a quick response time, which makes games run smoothly.

Size isn’t everything when it comes to monitors. While you might be tempted to get the biggest screen possible, remember that resolution and refresh rate are just as important, if not more so. Also, keep in mind that a larger monitor means a bigger desk and more space required to game comfortably. Ultimately, the best size for you is what’s comfortable and what you can afford.

What Does IP Stand For In Gaming?

Can You Stack In UNO?