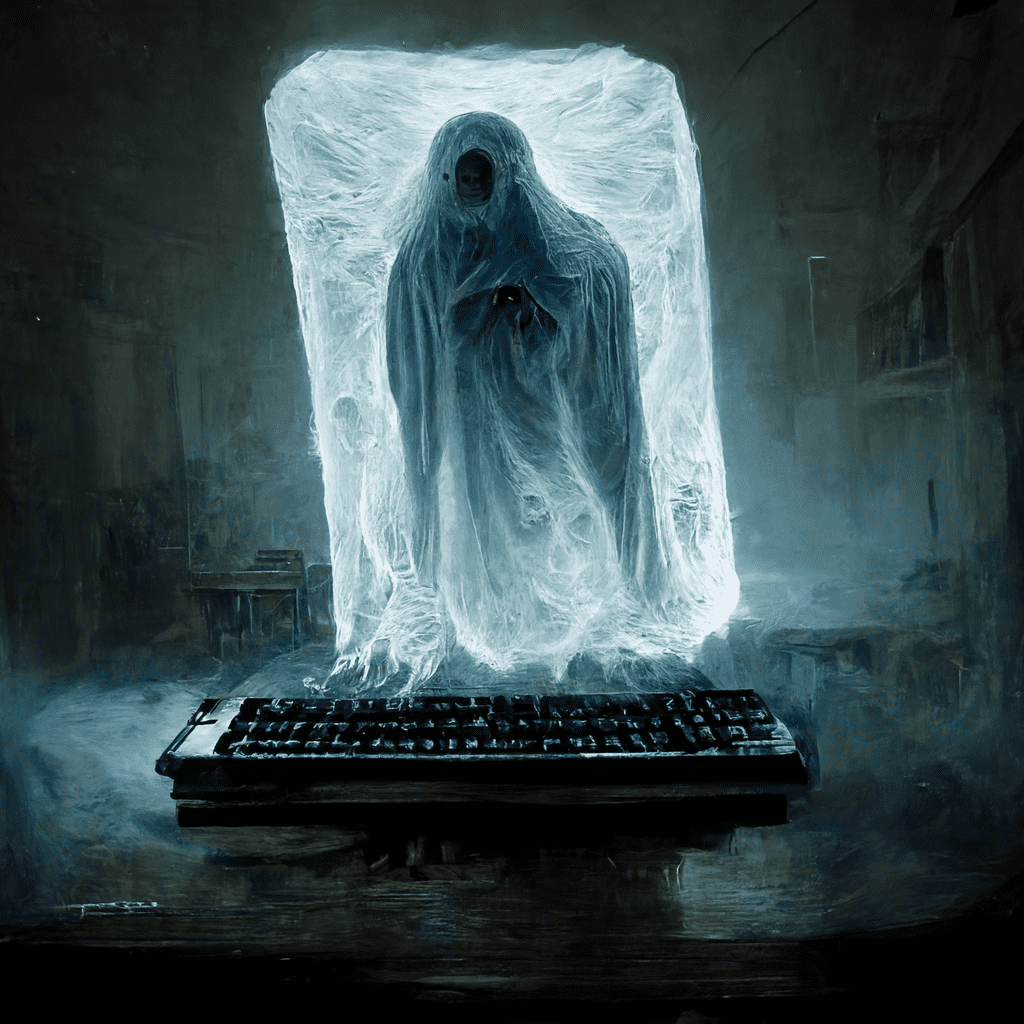 Have you ever been typing away on your computer, and suddenly, some of the letters on your keyboard stopped working? This is known as keyboard ghosting, and it’s a common problem. It can be very frustrating when it happens, and it can cause you to make mistakes that are difficult to correct.

In this blog post, I will discuss keyboard ghosting, how you know if your keyboard is ghosting, and what you can do about it. It’s often a real problem for computer users, but the good news is that it’s often simple to fix.

What is keyboard ghosting?

When you’re typing on a standard keyboard, all keys are connected in a grid-like structure. The connections between the keys determine how many rows and columns your keyboard has. Each connection from one key to another can be seen as an electrical path that allows current to flow through it when pressed down, and this is what sends the signal to your computer telling it which letter or number to type.

When two keys are pressed simultaneously, the current can only flow through one path at a time. If you press two keys next to each other, both letters will be typed on your screen. However, if you press a key and then quickly press another key located farther away from the first key, the current will have to flow through more paths, which can cause problems.

One of these problems is known as keyboard ghosting. Keyboard ghosting occurs when two or more keys are pressed simultaneously, and some of the letters on your keyboard do not appear on the screen, limiting the number of key combinations you can use at any given time.

This can cause you to make mistakes, and it is very frustrating when typing something out quickly because you have no way of knowing which letters were missed by your computer until after they’ve been typed into whatever program or text editor that is used (such as Microsoft Word).

Let’s identify the many types of keyboard hardware.

There are two main types of keyboard hardware: mechanical and membrane.

There are also several variations on these keyboards, with different features and combinations of hardware:

Most keyboard ghosting occurs on membrane keyboards because they have a lower number of electrical paths between the keys. This is due to how the rubber domes are arranged beneath the keys.

Why does keyboard ghosting happen??

You may have noticed that when you simultaneously press several keys on your keyboard, not all of them appear on the screen. This is known as “ghosting.” This phenomenon occurs because some keyboards are manufactured with an electrical circuit called a diode (often referred to as a ghost). Diodes only allow electricity to flow in one direction and prevent it from flowing backward.

When you press two keys, the diodes inside your keyboard block any electrical signals that typically travel between those two points, instead, they create a “ghost” signal that goes into another part of the circuit (possibly back through some other keys) and causes some of them not to work.

This is why you may find that some keys don’t respond when you try to type on them, or they produce a letter that is not the one you intended to type. The good news is that there are several ways to fix keyboard ghosting.

Does it happen with mechanical keyboards?

Keyboard ghosting is less common with mechanical keyboards, but it can still happen. This is because the diodes used in (some) mechanical keyboards are often of a lower quality than those used in membrane keyboards. This means that they are more likely to allow electrical signals to pass through them, even when two keys are pressed simultaneously.

How do you know if your keyboard is ghosting?

Is there a way to fix keyboard ghosting?

There are several ways to fix keyboard ghosting. One way is to replace your keyboard, which can be expensive and may not permanently solve your ghosting issue. Another option is to use software that will disable specific keys, so they don’t interfere with typing or other tasks on your computer. This type of software is called a keymap remapper/disabler.

Here are a bunch of questions I’ve seen people asking about keyboard ghosting and my in-depth responses to them.

How do I use a keymap remapper/disabler?

To use a keymap remapper/disabler, first, download and install the software (often called “keymapping” or “remap”). Then open up your keyboard’s settings menu by right-clicking on its icon in your taskbar and selecting “Open Keyboard Settings.” Once the keyboard settings are open, click on the “Remap” tab. You will see a list of all of the keys on your keyboard. Select a key and press the red “Disable” button to disable a key. You can also change how a key is mapped to another key by clicking on the “Change” button. When you are done making changes, click on the “Save” button and exit the keyboard settings menu.

Keyboard ghosting can be very frustrating and cause you to make mistakes that are difficult to correct. By using a keymap remapper/disabler, you can fix many of the common problems associated with key ghosting.

What is a full N-key rollover keyboard?

N-key rollover (abbreviated as NKRO) is a feature on some keyboards that allows you to press multiple keys simultaneously and have all of them registered. This is different from keyboard ghosting, which occurs when some keys are not registered because of electrical interference.

How do I know if my keyboard has NKRO?

There is no sure way to know whether or not your keyboard has NKRO, but there are some ways to test it. One way is to download and install software called “KeyboardTest.” This software will allow you to test all of the keys on your keyboard for functionality. Another way is to use an online keyboard tester. Visit one of the following websites and try your keyboard:

If you can press multiple keys simultaneously and they all register, then your keyboard has NKRO. If not, it does not have NKRO.

What is the difference between NKRO and keyboard ghosting?

NKRO is a feature that allows you to press multiple keys simultaneously, whereas keyboard ghosting is a phenomenon where some keys don’t register when pressed.

Is keyboard ghosting a problem for gaming?

Keyboard ghosting is not usually a problem when you’re playing video games. The reason for this is that most games have built-in anti-ghosting protection, which means they will ignore any keypresses that might be caused by keyboard ghosting.

However, in some games, it can cause problems with the WASD keys, which most gamers use to move around.

My shift keys don’t always work. Is that related?

Possibly. If your shift keys sometimes don’t work, it could be due to a problem with the key itself or the keyboard’s ghosting protection. Try testing your shift keys with a keyboard tester to see if they work correctly.

How can I tell if my keyboard has an anti-ghosting feature?

There is no sure way to know whether or not your keyboard has an anti-ghosting feature. However, you can test your keys with a keyboard tester to see if they are working correctly. If they are, then it’s likely that your keyboard does have some form of anti-ghosting protection. Most high-end keyboards today come with anti-ghosting technology and don’t suffer from the same ghosting issues as standard keyboards from older generations.

What are modifier keys on a keyboard?

Does my laptop keyboard have ghosting issues?

Laptop keyboards often have ghosting issues because of the way they are designed. The keys on a laptop keyboard are usually very close together, which can cause electrical interference between them. This interference can prevent some keypresses from being registered.

How can I fix laptop keyboard ghosting?

There is no sure way to fix laptop keyboard ghosting, but there are some methods you can try. One approach is to use a keymap remapper/disabler software I mentioned earlier, which will allow you to disable the keys causing ghosting issues.

Do screen keyboards suffer from ghosting?

Is anyone doing further research on improving keyboard ghosting?

Actually, yes. The Applied Sciences Group at Microsoft is researching new keyboard designs that could potentially eliminate the ghosting problem. So far, they have developed the Microsoft Sidewinder X4 keyboard, which uses a unique “scissor switch” design that is not susceptible to ghosting.

Microsoft isn’t the only one researching this issue. The Chattering Keyboards project at Carnegie Mellon University is also working on developing new keyboard designs that could potentially solve the ghosting problem.

These are the methods that you can use to fix keyboard ghosting. Hopefully, one of these solutions will work for you! If not, please feel free to comment below, and we’ll do our best to help.

Next time you’re buying a new keyboard, be sure to check for NKRO. It’s a great feature to have and can save you a lot of frustration. If you’re having issues with keyboard ghosting, try using a keymap remapper/disabler or cleaning your keyboard. And if all else fails, consider replacing your keyboard altogether.

We hope this article has helped you understand keyboard ghosting and how to fix it. If you have any questions or comments, please feel free to leave them below. And as always, thanks for reading!