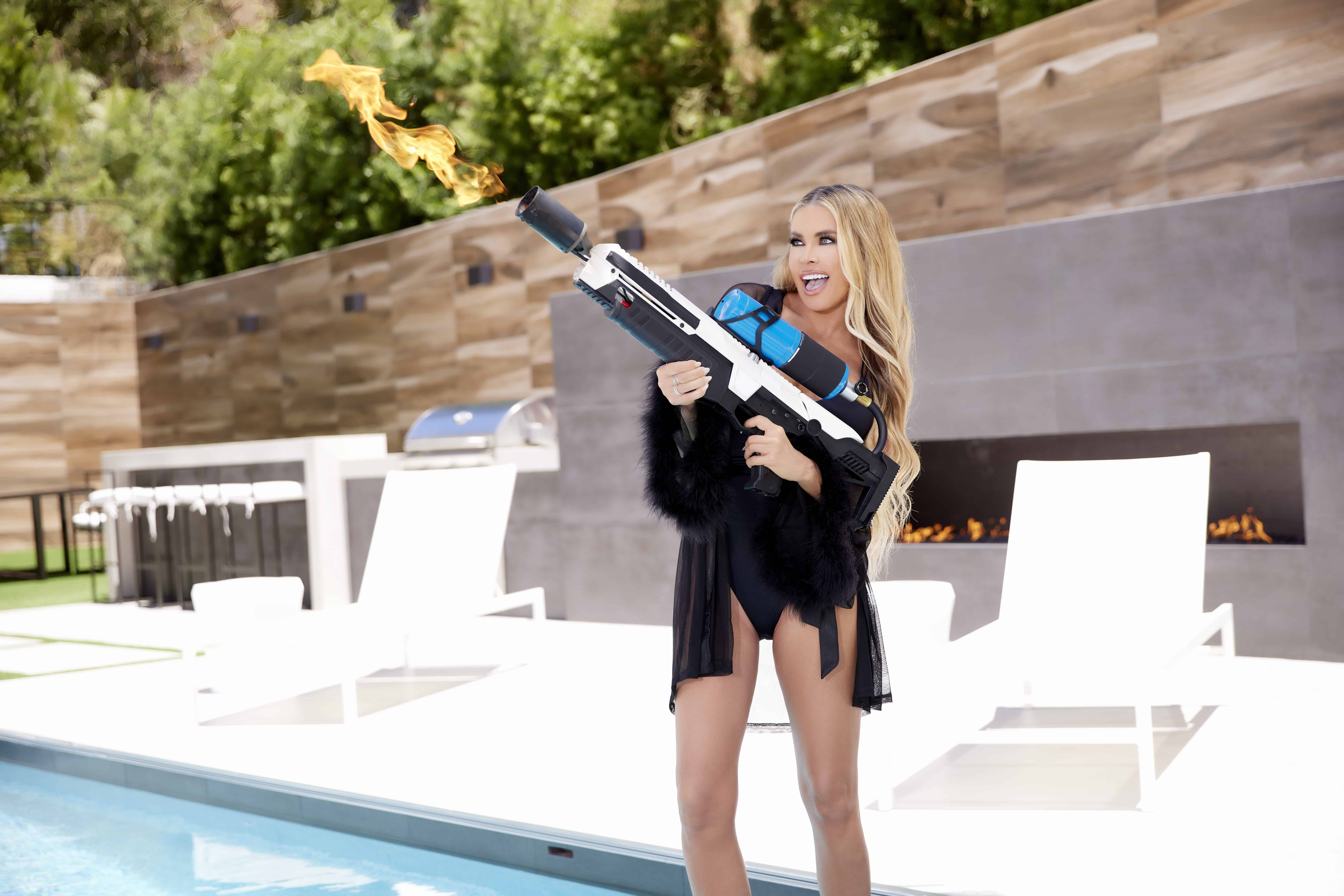 In the 1990s, Carmen Electra emerged as a major sex symbol, getting her big break as a singer thanks to musical legend Prince. It wasn’t long before she gained international attention for her stunning good looks and upbeat personality. But unlike some of her former co-stars and peers from comparable projects, Electra has managed to extend her fame into a career spanning more than three decades. Now 50 years old, Carmen Electra has reemerged as one of the highest-earning actresses and models in Hollywood, thanks to her ingenuity, connection with fans, and age-defying sex appeal.

What is Carmen Electra Famous For?

At only 19 years old, Carmen Electra met Prince in Minneapolis and became his protege. She released an album but didn’t become a household name until a few years later when she began to pose in Playboy magazine.

Electra’s numerous pictorials in Playboy, and later FHM and Maxim, earned her a role on Baywatch and then as the host of the MTV game show Singled Out. She continued to find mainstream success as an actress, model, dancer, and judge on several TV dancing shows. In addition to her roles in movies, magazine covers, and performances with The Pussycat Dolls, Electra found time to write a book and star in her own reality show.

A shrewd businesswoman in addition to being undeniably gorgeous and toned, Carmen Electra has always maintained profitable endorsement deals to supplement her income.

As many celebrities have found, Electra’s personal life is also of interest to her fans. She has been married twice, to NBA star Dennis Rodman, and Jane’s Addiction guitarist Dave Navarro. Both high-profile romances made headlines and drew even more attention to the starlet.

Throughout her 30+ year career, Electra has been best-known for her show-stopping good looks and overall likeability, earning her both male and female fans in droves. She is self-deprecating and sexy, able to laugh at herself while also putting her best foot forward.

Although there were several years that Carmen Electra kept her projects to a minimum, she has roared back into the spotlight in recent times thanks to several newsworthy ventures. One of the most notable is her OnlyFans account.

OnlyFans is an uncensored video and photo platform with direct access to models in an exclusively virtual format. The site allows for pornographic and risque content but with strict protections in place, and allows content makers to have full control over their portfolio.

After sharing a racy story about her ex-husband Dennis Rodman, Electra found that online searches for explicit content of her were soaring. Now, over 180,000 fans follow Electra on OnlyFans, where they can pay to interact directly with the actress, as well as make special requests. In addition to her OnlyFans earnings, Electra has an international lingerie line and continues to pursue lucrative endorsement deals that align with her branding.

One such partnership is with anti-aging health and wellness brand Nu Image Medical, whom she partnered with to promote their Screamer Gel Max, which enhances female orgasms through external application. Carmen Electra has proven to be an ideal spokesperson for the product, as an entertainer who seeks to look and feel her best while aging gracefully and maintaining her sex appeal.

What is Nu Image Medical?

Nu Image Medical is a leading telehealth provider in the regenerative and anti-aging industry, creating highly targeted programs to address the many hormonal and physical changes that accompany aging. The company was founded in 2008 by CEO Andreas Dettlaff but began operating on a national level in 2008.

In the 15 years that Nu Image Medical has been in business, they have expanded their product line to include programs for weight loss, hair thinning and loss, loss of libido, erectile dysfunction, insomnia, and hormonal imbalances. With loyal customers singing their praises for the proprietary and symbiotic formulations that maximize effectiveness, Electra’s main role within the brand is simply to raise awareness of its offerings for women, primarily Screamer Gel Max.

Screamer Gel Max is a 5-in-1 physician-directed compound that absorbs efficiently into the skin after topical application to the clitoris and female genitalia. Once applied, women can expect improved blood flow to the areas applied, increased sexual satisfaction, improved genital sensitivity, and increased chances of having an orgasm. For women who are going through the menopausal transition, blood flow to the vagina and clitoris decreases during this time. Women who need clitoral stimulation in order to orgasm find that orgasms are more difficult to achieve, making decreased enjoyment of sex a major midlife hormonal change.

Andreas Dettlaff and his team of medical experts have never shied away from attempting to create products based on customer requests and feedback. In fact, their entire line of programs is customer-driven and based on creating new solutions that existing customers see value in. This was the catalyst that led to the formulation of Screamer Gel Max.

Another way that Nu Image Medical has set themselves apart from competitors is their early adoption of telemedicine. Nu Image Medical is able to eliminate embarrassing and inconvenient office visits while diagnosing patients and prescribing programs through phone calls and video calls with their team of medical providers. This also lowers costs and allows providers to stay on schedule.

At 50, Carmen Electra falls squarely into the core age group that Nu Image Medical markets to, but it’s important to remember that aging affects everyone differently. Hormonal imbalances can impact people in all age brackets, and many Nu Image Medical clients take advantage of multiple programs.

Thanks to spokespeople like Electra, Dettlaff and his team are growing their client base, which allows them to help more people. This has always been the driving force behind Nu Image Medical. With thousands of customer testimonials and grateful repeat clients, Dettlaff knows that all of the investment, research, and stringent compliance to regulatory laws is worth the effort.

As Carmen Electra reinvents herself yet again, her years of hard work and brand-building are paying off. Mutually beneficial partnerships, such as this one with Nu Image Medical, are easy to identify when your image is solidified and recognized by a large and adoring fan base. Just as likable as ever, but more accessible than ever before, Electra is paving the way for female entertainers to extend their careers well beyond their twenties and thirties. We can’t wait to see what this firecracker delves into next.

Top-Notch Recruitment Strategies To Hire Only Top Talent In 2023