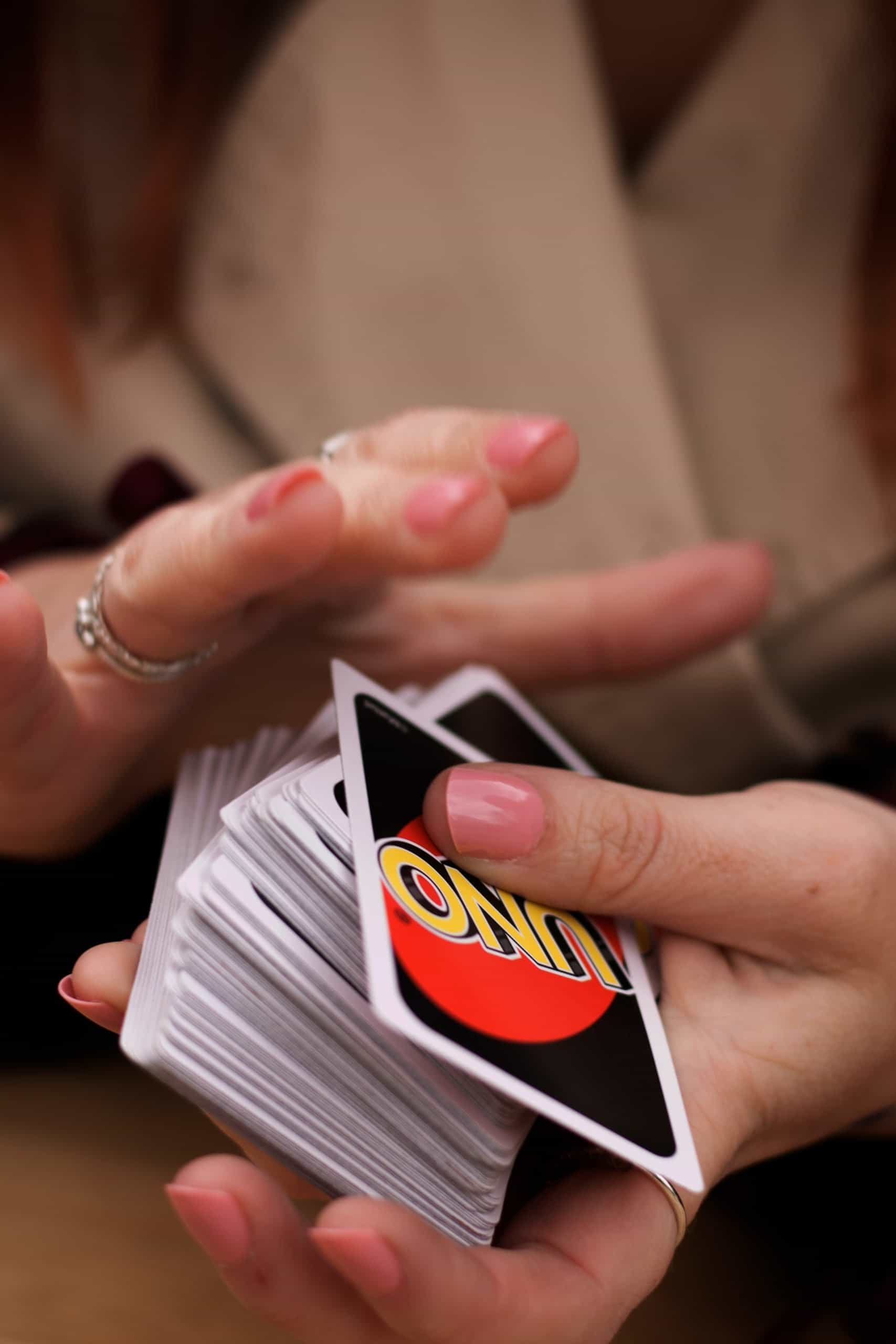 What does the shuffle hands card mean in UNO? The shuffle hands card is special in the UNO deck that allows players to shuffle their hands and redraw new cards. This can be useful if you have a lot of low-value cards that you want to get rid of, or if you want to try and draw better cards to improve your hand. either way, the shuffle hands card can be a great tool for giving yourself a fresh start in the game. Just be sure to use it wisely, as your opponents may be able to take advantage of the situation if you’re not careful!

Another Interesting Read: How Do You Play UNO Moo?

What Does The Shuffle Hands card Mean in Uno?

The card game Uno has been played by almost everyone. Uno has a lot of cards, but for this guide, we’ll only talk about what does the shuffle hands card mean in uno? Look at this card again and see how it works.

What Is The Significance Of The Shuffle Hands Card?

It’s up to the person who used a card to get all the cards from all the other people. They then shuffle the deck, practice a little with our professional card shuffling tips guide, and deal the cards again to each person, as they did before.

To be fair, when someone gets back their money, they should get the same number of cards as before. This isn’t always the case. One player may have more cards than the other player. This isn’t important, but it still follows the rules.

If you have cards that you can’t play, the Shuffle Hands card might be useful to you. If you play the card, you effectively make a new hand, and as a result, you might get better cards.

In addition, you can quickly break any other player’s hand. Even worse, you might end up with even worse cards than you did before. In any card game, there must be a balance between risk and reward, just like in any other game.

Where Can You Find The Shuffle Hands Card In Uno?

What does the shuffle hands card mean in uno? There are different versions of Uno, but Shuffle Hands is not in everyone. Among other things, Uno Attack doesn’t come with a card. It also won’t be in previous card sets because shuffle hands didn’t come out until the end of 2019. You almost certainly have it if you have a deck of Uno cards from the last few years or so.

Can You Win With Shuffled Hands Card?

It’s at this point that things start to get complicated! On Twitter, Uno shared the official rules with everyone. Using the Shuffle Hands card as your final card is not allowed if you follow the rules.

According to some, this rule is unfair because it forces you to use Shuffle Hands until you get your last card. Some people use this in the same way as a Swap Hands card. When used as the last card, it becomes another wild card.

Is The Shuffle Hands Card Required To Be Played?

Yes, just like most of the other special cards in Uno, the Shuffle Hans card is completely up to you. if you don’t want to use it. So, we think that you should give it a try. It adds a whole new level of fun to the game.

That’s it for the Shuffle Hands card in Uno. In some games of Uno, this card doesn’t show up, but when it does, it can make the game more interesting. What will happen if I try it?

What Is The Exact Meaning Of UNO?

In Uno, millions of people around the world play it. Making cards that match and then discarding them until there are no more is how this game is played. What does the shuffle hands card mean in UNO? Since Uno was first made, many different versions have been made. The following are the rules that were used when Uno was first made.

Two to ten people who are at least seven years old can play the game. Everyone gets seven cards to face down. To make a Draw Pile with the rest of the cards, shuffle and sort them. It should be placed next to the pile. When the top card is put in the Discard Pile, the game starts.

Player 1: The dealer’s left player starts the game. Player 2: The dealer’s right player is the first player to start (you can also choose the youngest player). Each player looks at his or her hand and tries to find a card that looks like the card in the Discard Pile.

You have to match the number, color, or symbol/action in some way, so you have to do something that looks like it. A red card with an 8 on it must be put in the Discard Pile. Also, a wild card can be used (which can alter the current color in play).

If a player doesn’t have any cards that match or don’t want to play any of them, he or she must draw a card from the Draw pile. Play that card if you can. Keep the card and give the game to the next person. A Wild card can also be played during your turn. You can also draw four cards with a Wild card.

The Shuffle Hands card is a great way to mix up the game of UNO and give yourself a fresh start. Just be careful when you play it, as your opponents may be able to take advantage if you’re not paying attention!

5 Best Geeky Hobbies
Geeky Book: Top 10 Best Books For Geeks
How To Make Money As A Graphic Designer
Here’s How To Play Letter Jam
How To Play Balderdash

How To Cancel Prime Gaming