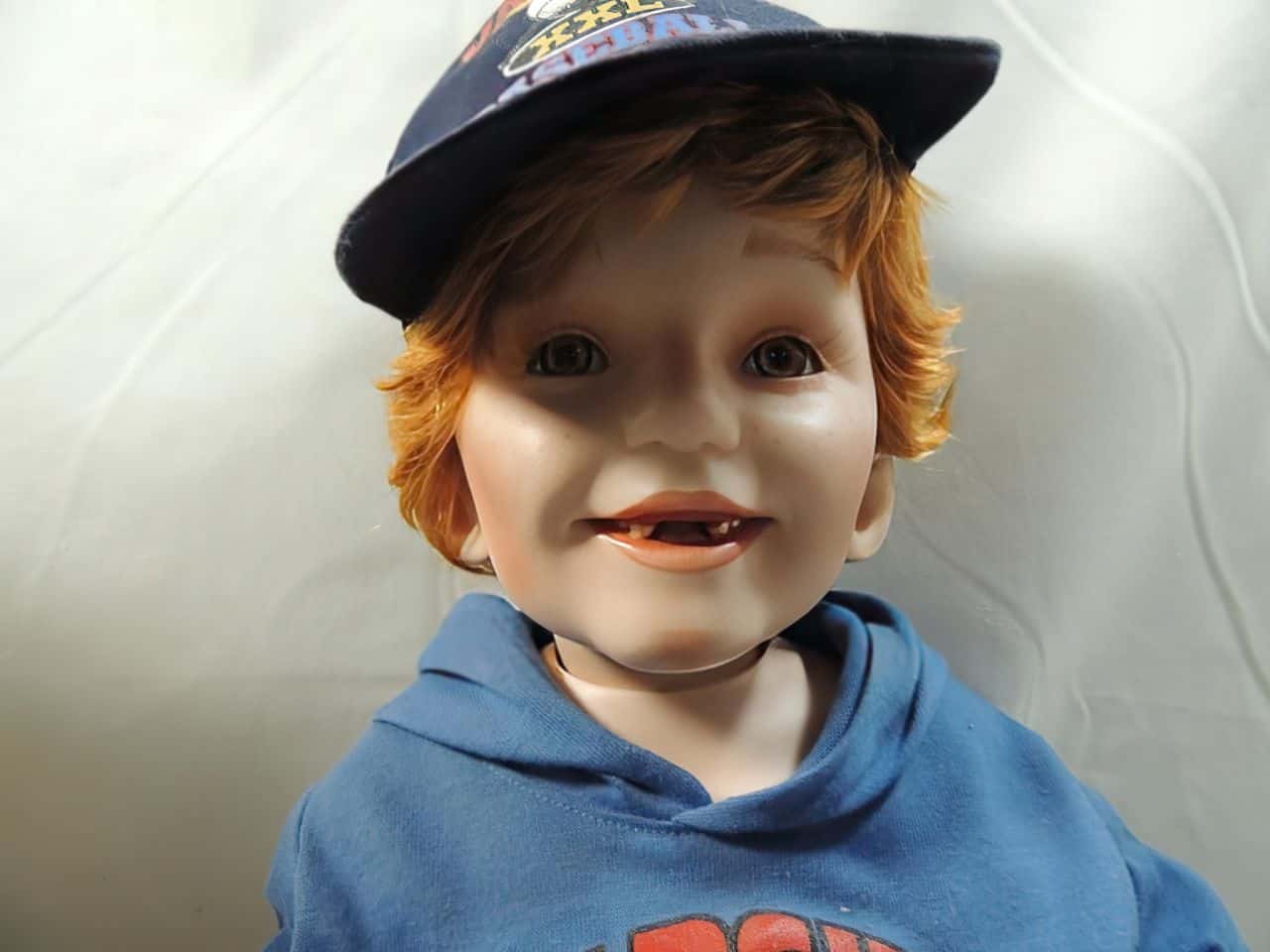 Warning: Look away now if creepy dolls cause you nightmares.

Some things can only be found in America. Spray cheese, excessive tipping, the big yellow school bus, and strangely, faceless time-out dolls.

These creepy, faceless child-like dolls can be found all over car shows and your local flea market. Usually propped up against different car parts, the dolls will be sat on the bumper, the front seat, or the steering wheel.

Unsurprisingly, spectators are confused about their origin and want to know why the time-out dolls (also known as “corner dolls”) are still being put out at most vintage car shows in America.

Not to be confused with props that have been stolen straight off the set of American Horror Story, these large-bodied dolls are misunderstood, and with good reason. After looking at Reddit threads and online forums, it’s pretty clear that the reasoning behind the dolls is unknown. Many tall tales have been passed down through the decades, and few can give a definitive reason for these creepy little kids joining us while looking at Ford Thunderbirds or yet another shiny-red Cadillac.

Originating in the 1950s, the time-out dolls were made to represent a large-ish, realistic child dolls with their hands covering their face. With different adaptations being created over the years, the dolls have become a staple item to spot at your average American car show.

The phrase’ time out’ often refers to a child’s punishment for some bad behavior. Consequently, the dolls look like they’re in a permanent state of dismay and upset, much like the equally creepy Furby toys that graced store shelves in the 90s.

So, why are the time-out dolls still used at car shows?

The truth is, there is not a definite answer. There is no conclusive answer to why these abnormal figures are propped up against the shiny bumpers for everyone to experience.

The dolls are usually presented with a ‘faceless’ appearance, dotted around cars, sitting on the roof, or peering over steering wheels. They’re often made up in a period fancy dress, like a petticoat, a shiny bomber jacket, or a crew-neck cardigan. Some say this is to bring a sense of nostalgia to the shows, representing innocence and a memory of the average car-goers childhood.

What’s the meaning behind these dolls?

Theories behind the meanings of the dolls vary from person to person. Everyone likes to get in on the myths and legends behind it all and to give their input on the origin of the dolls. Sadly, this means the real reason behind the mystery of the time-out dolls has drifted further into the past.

Are the time-out dolls only there to cover paint scratches and bumps on the vehicle? They do create a pretty good distraction. There’s no question as to whether or not the dolls are eye-catching enough to hide any faults.

Or were the sad, faceless dolls created to represent all the children who hate car shows? Most of the upset lifeless children look like they’re throwing a strop or having a tantrum while leaning on their parent’s beloved cars. It’s a unique way to bring children to car shows.

Some state the crying children represent the sadness of a child realizing his inheritance has been spent on his father’s overpriced Chevrolet.

But most state the dolls remind them of the past. As the shows attract many retirees, having the dolls on display starts a conversation, reminds the oldies of their youth, and brings back childhood memories.

Over the past few years, several judges have requested car owners to stop displaying time-out dolls in front of their vehicles due to their ability to hide paint scratches or dents. It sadly (or not so sadly, if child-like dolls give you nightmares) looks like the time-out doll could end.

There’s no doubt that the far out-of-town, wacky, remote areas with tons of enthusiasts living and breathing car shows will still find the room to display their beloved creepy child-size dolls. Some even state that people travel to their event due to the craziness of the time-out doll outfits and positions. Each to their own, right?

Have there been any strange occurrences with time-out dolls?

Some say the dolls give off a strange feeling as if they’re being watched. It could be their beady black eyes staring into your soul or their faceless grins following you around the show, but something spooky is going on.

There are many tales of car owners waking up in the middle of the night to find their time-out doll has moved position or is no longer in front of their car. One enthusiast claimed to have woken up to find his time-out doll was now sitting in the passenger seat of his car!

Time to finally check out that classic car show…

So the next time you effortlessly drive by a car show or spot one advertised on the freeway, give it a go. Whether or not you like American cars, now you know these crazy characters exist; how could you resist? And if you see a time-out doll, be sure to ask the owner about it. They love to talk!

And who knows, you might be lucky enough to see a miniature Elvis sitting in the front seat of a hot rod. The perfect material for your next Instagram story.

What Is Keyboard Ghosting? How to Detect and Fix This Annoying Problem

1 thought on “What Are the ‘Time Out’ Dolls at Car Shows?”