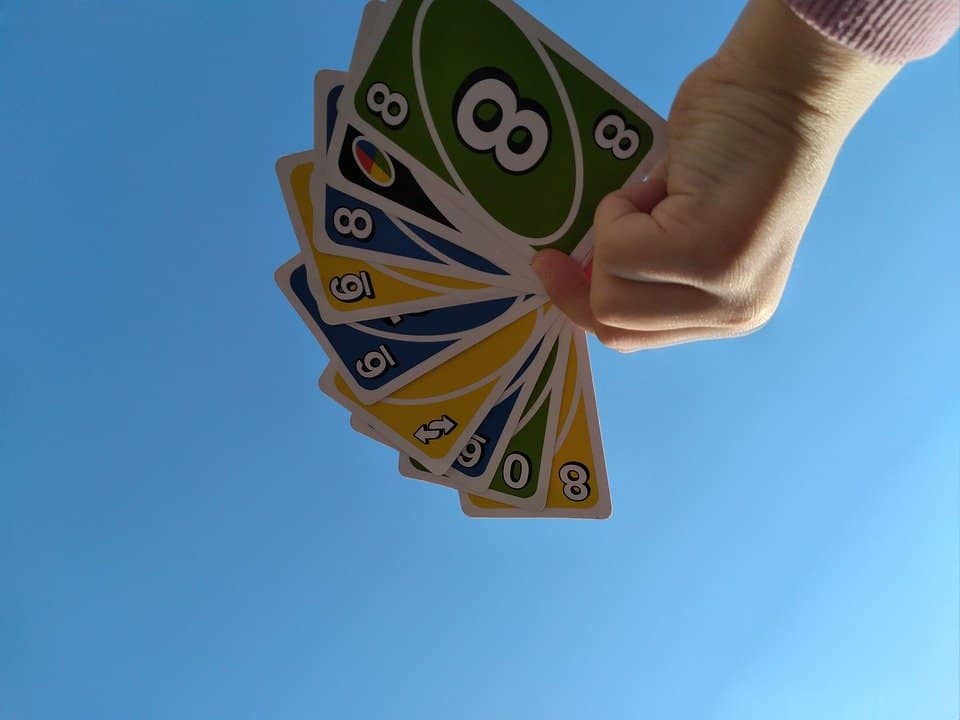 If you’re looking for a spicy twist on the classic card game UNO, then you’ve come to the right place! Spicy UNO is a fun, fast-paced, new variation of the original game that will get your heart pumping. It’s one of my favorite games, so let’s get to it.

Because the classic UNO game can be a little too easy for more skilled card players, Spicy UNO has developed a new game mode.

It has many of the same official rules as UNO, but it encourages more interaction between players, making it great for a party game with friends, like the Cops and Robbers card game.

What Is Spicy UNO?

Spicy UNO would not be possible without the original UNO, a card game invented by Merle Robbins in the United States and is now played worldwide.

The game Spicy UNO is a mix of Crazy Eights and regular UNO.

How To Set Up Spicy UNO

Shuffle the deck and give each player seven cards. When a player wants to draw a card, the draw pile comprises cards that haven’t been used. The pile is in front of each player.

During play, players also place their cards in the middle of the table as the discard pile so they can be thrown away. When the draw pile is full, flip the discard pile over to make a new draw pile. Then you can start adding cards to the top of the pile again.

To start, flip the top card from the draw pile over and put it in front of the first player. Then, the next player must follow.

The game starts when the player to the dealer’s left puts a card on top of the starting card. This is how it works:

How to play Spicy UNO: The Basics

People who want to learn how to play Spicy UNO should start by learning the standard rules of the classic game. These rules also apply to the spicy version of the game.

Players go around the circle and put cards on the discard pile that matches the color or number of the cards that came before them.

One player can’t play a card. They must draw one and put it in their hand.

They say “UNO” when they can only have one card in their hand.

The player who gets rid of all their cards wins the game.

Some cards are not numbers; they are action cards with unique abilities that can help or hurt you during the game.

In your UNO game, add the following rules:

Spicy UNO doesn’t have a specific scoring system, but remember the sharpie we told you about as one thing you’ll need?

The winner of the game is asked to sign their last card, which shows that they won. As you play Spicy UNO, it makes a deck of memories that is unique to you.

Here are a few frequently asked questions about Spicy UNO that we get:

Is this game suitable for family game nights?

Spicy UNO is suitable for ages seven and up, but as with any game, use your best judgment when deciding if it’s appropriate for your family.

Is this a good drinking game?

Yes, we don’t recommend it for already intoxicated players because it may start some arguments. I’ve seen this while camping, and it can get pretty heated.

Is this the same game as Dirty UNO?

No, Dirty UNO is a different game with different rules. I’m sure you have some idea from the name what that version of the game is like. Just think about it for a moment…

How long does a game of Spicy UNO take to play?

A game of Spicy UNO usually takes about 30 minutes to play.

What are wild cards?

Wild cards can be played anytime and let the player choose what color the next person must play.

What is a draw card?

A draw card is a card that makes the player who played it draw more cards from the deck.

A draw 2 card makes the next person in the circle lose their turn and pick up two cards from the draw pile instead.

What is a wild draw 4 card?

A wild draw 4 card is just like a wild card, but it also makes the next person in the circle lose their turn and pick up four cards from the draw pile.

Are there any special cards?

What does it mean to “stack” pluses?

Stacking pluses means that if a player plays a +2, the next player must play a +2 on top of it, and so on. If the next player doesn’t have a +2, they must pick up four cards from the draw pile instead.

What are zero cards?

Zero cards are cards that let the player choose any color they want. The next player has to play a card of that color, or they will give up their turn and pick up two cards from the draw pile.

Is the game suitable for a large group of players?

Yes, as mentioned below, it’s ideal for 2-10 players—more than enough for you and your close friends.

How many players can play Spicy UNO?

Spicy UNO can be played with anywhere from two to ten players. If you want a faster game, keep the number of players low.

What happens if you have identical cards?

If you have identical cards, you can play them on top of each other during your turn. The game is then kept going by the last person who isn’t playing in their turn.

How do you win Spicy UNO?

Spicy UNO’s goal is to eliminate all of your cards. The first player to do that wins the game. So the end of the game looks like this:

Player 1 has no cards left, and so they are the winner!

The spicy version of UNO is a fantastic way to liven up the game if you’re bored with the traditional rules. Whether playing with family, friends, or colleagues, this game is bound to get everyone involved and excited.

Do you have any other spicy UNO rules we missed? Let us know in the comments section below.

So there you have it, spicy UNO rules to spice up your game! Try out some of these new rules the next time you play for more exciting and challenging fun. And remember, whoever wins gets to sign their last card with their name for all to see!

Octokuro Model: A Comprehensive Guide to Her Cosplay Photos and Videos