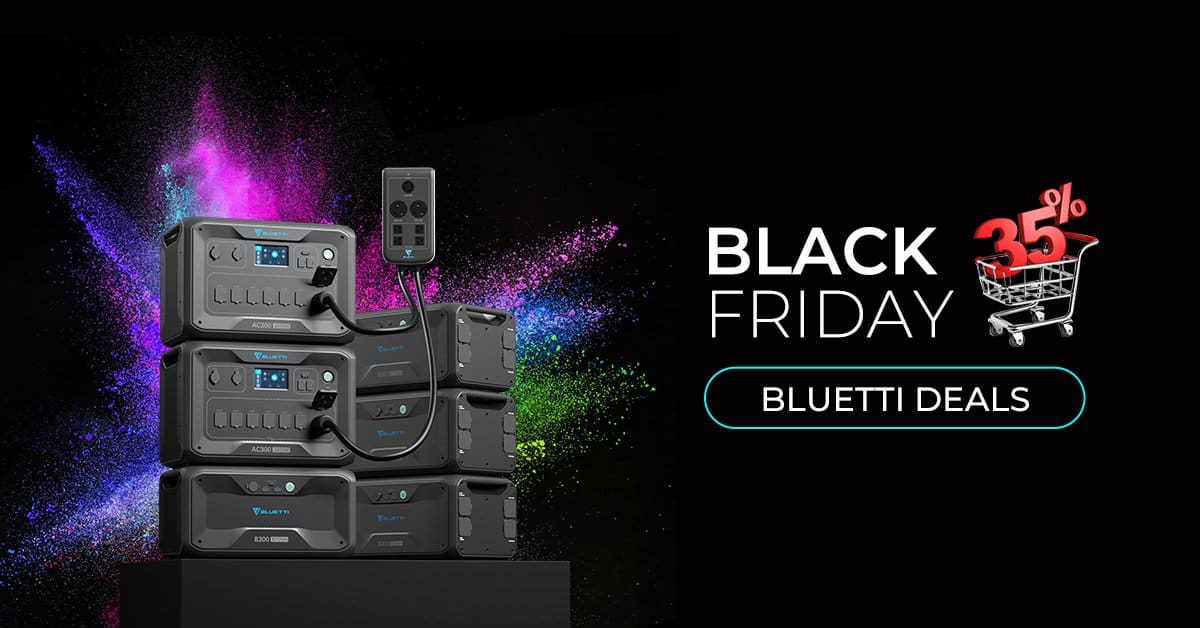 Bluetti will blow your mind with its incoming Black Friday deals offered this year! Get the latest solar generator technology deals and save hundreds.

Black Friday is fast approaching this month, so it only means one thing: tons of awesome deals are up for grabs for customers!

With a Black Friday sale that includes discounts on their entire product line, Bluetti gives the biggest discounts they’ve ever offered for homeowners, vanlifers, RVers, and campers. These special discounts are nothing short of impressive, and will easily be one’s best purchase for the whole year!

Here are the best three deals on offer, deals one can’t simply miss:

For the homeowner looking for unlimited power:

Bluetti’s AC300 and B300 battery modules are among the most popular solar products currently available in the market.

The AC300 can take up to four external battery packs, giving the system a whopping total capacity of 12,288 Wh! Running out of power will never be an issue with the AC300.

Modular solar generators offer great flexibility in terms of transporting such equipment. Previously, transporting that much power was such a hassle for people on the go. Thanks to Bluetti, transporting vast amounts of energy has become not only simple but also possible.

These B300 battery modules use world-class LFP (lithium ferrophosphate) cells, which provide 3,500 cycles of life, making them some of the most durable solar panels available. Besides their capability to provide long-lasting power, Bluetti is an ace in the portable solar power market and is still a favorite among homes that prefer solar power anytime.

Charging can be made extra fast as the AC300 can be charged using AC and solar simultaneously while connected to two B300 batteries. Bluetti AC300 also allows the connection of the Bluetti Fusion Box Pro, which will increase voltage, power, and capacity up to 6,000W, 240V, and 24,576Wh. Time to power up your home!

For the unexpected power outage:

The AC200MAX is an upgraded version of Bluetti’s classic model, the AC200 (initially launched on the crowdfunding platform Indiegogo), for better performance.

For the perfect camping trip:

When wall outlets are out of reach, portable solar panels are a great option. The Bluetti PV120 series and PV200 series are foldable solar panels designed for campers, van dwellers, and small/medium-sized off-grid systems. No worries about losing charge in the middle of nowhere for your gadgets. Bluetti’s space-efficient, van-friendly foldable solar panels, ensure you’re all powered up, be it in the beach or wilderness.

Monocrystalline solar cells make up Bluetti’s PV120 and PV200 solar panels, which are arguably the most efficient solar cells available on the market today.

Their ability to generate clean power even when sunlight is at its purest form is mainly responsible for this. The Bluetti PV120 and PV200 are always ready anytime the sun shines to provide power during your camping and road trips.

Bluetti’s portable power solutions always cater to your varied power needs, so don’t forget to check out these fantastic Black Friday deals and get reliable power with Bluetti.

How Counting Cards Works in Blackjack

Make Your Home and Office Beautiful By Flower Stands and Vase