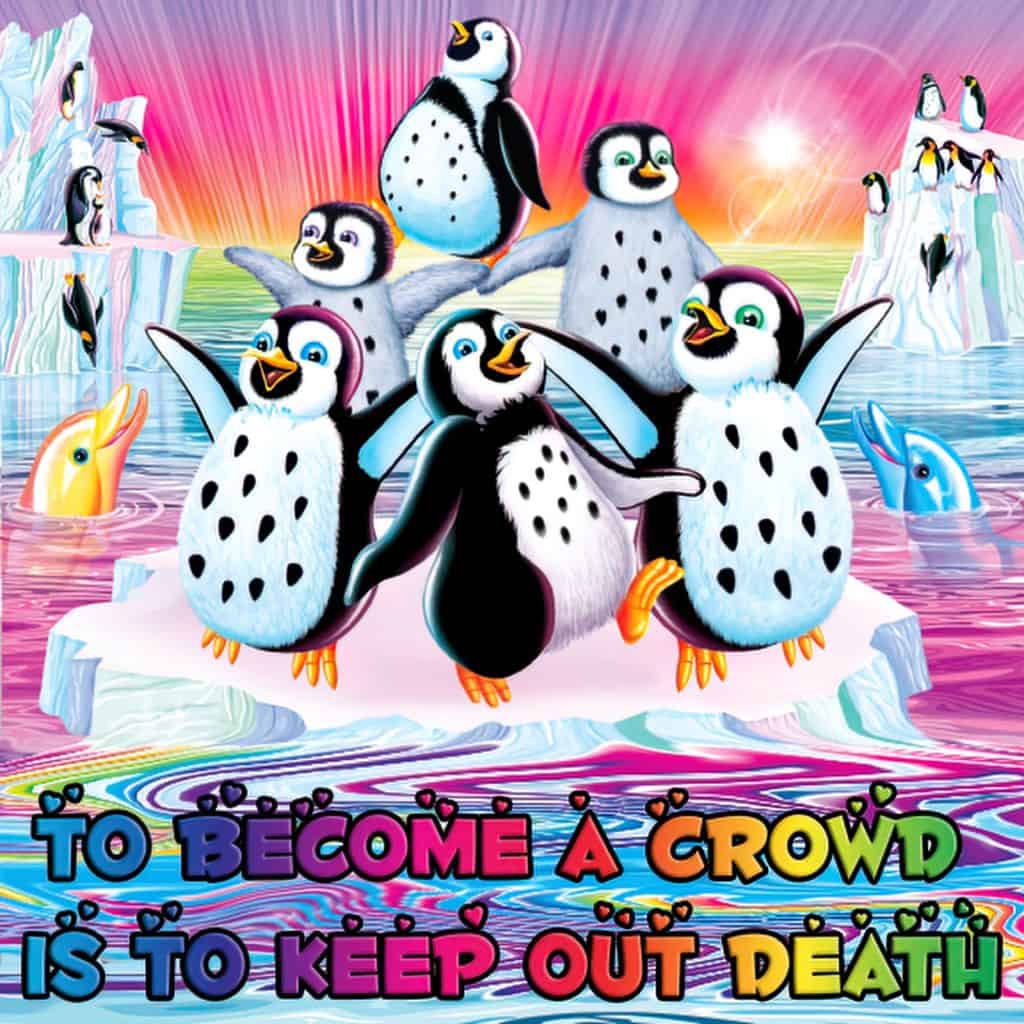 Before delving into the art of Nihilisa Frank, I had no idea such a thing as “Kawaiilism”, a.k.a. Cute Nihilism, existed. What is, on the surface, a cute drawing of a white kitten with a glittery crown and sparkling bracelets, is actually a piece of art bearing a nihilistic message: “Appearances are nothing more than radiant manifestations of emptiness”. My question is, then: how do you reconcile Kawaii art with Nihilism?

Let’s start from definitions. Nihilism is defined, by Merriam-Webster as “a viewpoint that traditional values and beliefs are unfounded and that existence is senseless and useless. Nihilism has existed in one way or the other for centuries, but the philosopher who is associated with it the most is Friedrich Nietzsche. Yes, that Nietzsche, the one who proclaimed that “God is dead […] And we have killed him”. Kawaii, on the other hand, is the culture of cuteness, originated in Japan in the 1970s. It extends to all aspects of life, from gadgets to gender performance, that can be considered charming, vulnerable and childlike.

At first glance, it would seem impossible to put these two concepts together: how can you make “nothing matters” look cute?

While researching Kawaiilism, I stumbled upon the notion of “Sunny Nihilism”. To sum it up, it’s the tendency of the younger generation to embrace the lack of meaning in life and being optimistic about it. “Our economy is in shambles, the planet is on fire, we are trillions of dollars in debt”, they seem to say, “we might as well have fun”. And, to be quite frank, it is an approach that I’d be willing to share.

Nihilisa Frank expresses this notion in her art, embedding messages of hopelessness, lack of meaning and superficiality of our world into images of cute pandas, dolphins and beaches. Her art seems to be inspired by that of Lisa Frank, and her pseudonym alone would suggest it. Lisa Frank is known for being the founder of Lisa Frank Inc. The corporation, as of 2019, was producing school supplies and stationary featuring rainbows, neon colors and stylized depictions of animals. Nihilisa Frank takes this type of designs into nihilistic territory.

This art ties in perfectly with the notion of Sunny Nihilism I spoke of above. Optimistic Nihilists believe that one can be happy despite the utter meaningless of life itself. In his TEDx talk on Optimistic Nihilism, Elias Skjoldborg presents a plan of action to be “a happy emo”. His main point is that our existence is meaningless, as we are merely a speck of dust in an indifferent and infinite universe. His main goal is to be happy, instead of sitting and waiting for death, and one of the most important steps towards that is the attitude one has towards life. If we embrace our lack of meaning and the pointlessness of our lives, we can take the next step, the step towards the sparkling, cute dolphins. That is, we can enjoy our life because it doesn’t have any meaning, not in spite of this fact.

To sum it up, the art of Nihilisa Frank represents a possible solution to the spreading existential dread. As long as we are happy and making the most of our lives, the hopelessness we feel in the face of climate change, racism, wealth inequality and so on can be tackled with glee and sparkling penguins.

Does Your Business Actually Need a Mobile App?

27 comments on “Nihilisa Frank Asks, Is Kawaiilism the Answer to Our Existential Dread?”