In Minecraft you have an opportunity to change different modes. One of them is Creative Mode. The peculiarity of this regime is that it has no aspects of survival. The site https://skins4minecraft.com/ will help you to uncover all the secrets and benefits of this topic.

You have the blocks you require in the Creative Mode inventory, to build in unlimited quantities. Blocks are basic objects that in most cases represent the cubes from which the game world forms and which are an integral part of the game. Together they create the physical environment and can be seized, changed and turned back into the game world. You can remove these blocks with one stroke.
Thanks to these block properties, players can easily create and remove huge mechanisms and structures. For example, locks, roads, fountains. There’s also pixel-art. This mode is available in Classic and Beta versions after Adventure Update.

Creative Mode can be selected in the process of creating the world. You can go to this mode using the /gamemode 1 command. During the game, you need to press «/». A console card opens to enter special commands. Commands need to be entered in Latin letters. Enter «gamemode creative». After that, press Enter. Creative Mode is activated.

In the multiplayer, each player can individually change team mode: /gamemode

If you want to disable the mode and return to the standard survival conditions, then use the /gamemode survival command. Modification mode commands are executed instantly.

In Creative Mode, the regular inventory screen changes to the item selection screen, that is a bookmarked interface. It contains all the blocks and items added to the game. Another function in this mode is a search function. One tab is similar to inventory in Survival mode since there are slots for armor. Other tabs contain food, building blocks, decorative blocks, and other. The behavior of some subjects differs from the Survival mode. For example, empty buckets are never filled with water or lava. Conversely, filled buckets don’t become empty. 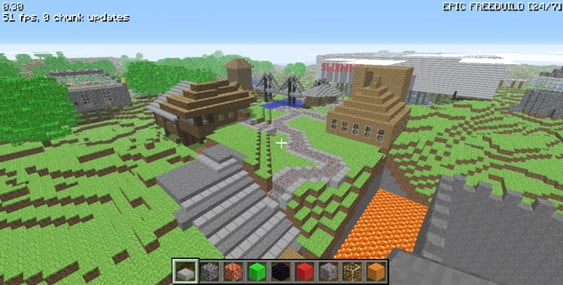 In order to fly, you have to double-click on the jump (Space key). You can use the jump key to climb and the shutter key to go down (left Shift). Use the keys W, A, S, D on the keyboard to move. Flight mode can be disabled by a double jump. In this case, the player will fall to the ground.

Intact blocks (Bedrock, Command Block, Barrier, or Portal frameworks) can be deleted in Creative Mode. If the player goes too low to the Void, then he will die. But the player can fly over the Void if he doesn’t go below the corresponding level. This is the only way to die, with the exception of the /kill command. If a player holds a sword in his hand, he won’t be able to destroy the blocks. If the player flies among the clouds, then the Sun and the Moon will be visible together. Some items are only available in Creative Mode, such as Spawn Egg. In order to take a block in inventory, you need to click on the block. Unlike the Survival mode, the selected block appears in one of the shortcut cells, even if such a block is already presented in the user’s inventory. In SMP, items that don’t belong to the creative inventory, as well as enchanted items, will be moved to inventory.

Creative Mode also allows you to duplicate objects using frames. When placing an object in a frame, the object itself won’t disappear from the player’s hand. If, by aiming for a subject, pressing a digit from 1 to 9, this slot will be filled with the stack of the object on which you click with the mouse. But if the slot was filled with another object, then this item will be removed from the quick slot and will return to the tab.

In Xbox 360, creating new worlds using Creative Mode or entering existing worlds from Creative Mode will result in the upgrades and Leaderboards being disabled. That means, that the list of leaders exists only in the world with the regime of Survival. The Xbox 360 inventory is similar to a computer version.

Content Management Systems: 5 Reasons Why Webmasters Love Wordpress so Much

How to Develop the Right Chatbot for Your eCommerce Store