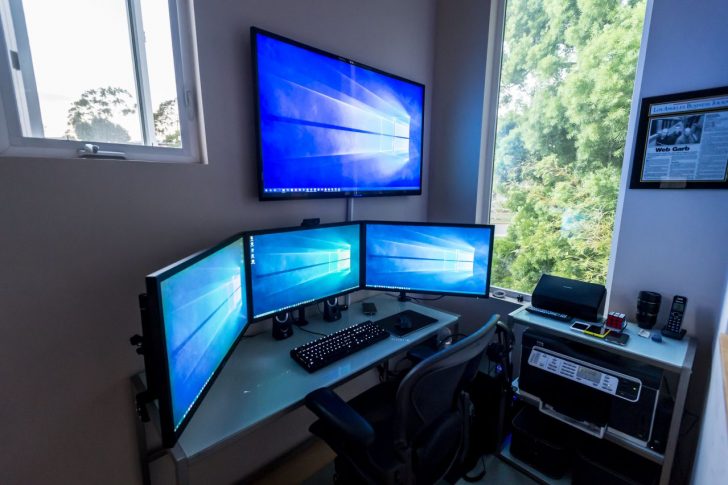 There is a big disagreement on deciding between LED screens and LCD screens. Even though they have only one different feature, the difference it makes is worth having a debate on. Even though the common assumption is about LED screens being better than LCDs simply because they somewhat ‘developed’ the existing LCD technology, you should decide based on your device.

While the differences of LED screens are strengths in TVs or phones, they turn into weaknesses when in comes to choosing a monitor for gaming.

What’s the difference between an LCD and LED screen?

First of all, lets start by understanding the difference. To begin with, LCD stands for Liquid Cyristal Displays. It’s used in most of our every day objects such as laptops, tablets, TV’s and even smart watches. This common usage comes from it’s practicality. LCD screens are much thinner and consume less energy compared to CRT (Cathode Ray Tube) screens. Basically, an LCD screen consists of a very special liquid squeezed between two panels of screens and gets activated when it meets a current. Also, LCDs don’t produce light on their own, they have backlights on the sides or the back of their panels to illuminate the screen. The most common method for backlighting for LCDs is the Cold-Cathode Fluorescent Lamp (CCFL) which consists of a series of tubes laid horizontally behind the screen that illuminates the whole screen from one particular light source.

LED on the other hand, stands for Light Emitting Diode and is usually used in TVs and monitors. It has a very short depth, is lighter than other screen alternatives and was initially created by Samsung. The only significant difference between an LCD screen and a LED screen is the backlighting. While LCDs depend on one backlight and disperse it through a series of tubes, LED screens have a series of light emitting diodes scattered all around the screen that illuminates the screen. Taking advantage of the high number of light sources, LED screens allow some features such as broader dimming range, better contrast rates and a lower energy consumption, even though they cost more.

Which one is good for a Gaming Monitor?

Reasons of preference for both screen types can vary depending on the device. These features are; resolution, refresh rate, size, panel or display technology, lag time, G-sync and Freesync, price, viewing angels and aspect ratio. Among these features, panel type stands out as the most important feature simply because it determines the price, refresh rate, response time, viewing angle. In other words, about everything you need to consider before choosing your game monitor. Which is why, choosing between LED and LCD becomes very important due to their different panel systems.

Let’s start with a comparison. What are the benefits of LED screens? They use many backlights therefore they are almost instant while CCFL systems need some time to warm up. LED screens consume less energy, have better response times and they are thinner and lighter. Having better colors, brightness and contrast are the benefits of having a LED screen. On the other hand, having evenly scattered backlighting makes whites brighter and dark colors even darker, which can tire your eyes if you’re playing a bright game or prevent you from seeing clearly if you prefer darker games. On the other hand, the reasons among choosing LCD screens for gaming is definitely its low prices compared to LED screens. Other than that, LCDs in the long run are recommended by many as the better choice as a gaming monitor since heads-up display (HUD) elements in some video games may create ghostly permanent images on the screen when used for a long time. This is called a burn-in, which is less likely to happen with LCDs.

So, LED screens have more contrast, more brightness, consume less energy, and have better response times. LCDs on the other hand are a lot cheaper, have lower response times, lower contrast and brightness rates but have more chance to prevent a possible burn-in. Overall, LED screens seem like a better choice. However, when it comes to the gaming monitors, the advantages of the LED screens can turn into disadvantages. Higher contrast and brightness rates prevents you from seeing what’s on the screen clearly and can tire your eyes or even cause a permanent damage after long hours of playing. When it comes to gaming monitors, the lower contrast and brightness levels that LCD screens have can be an advantage for the gamers since it goes easy on the eyes and possibly provides better vision considering most games tend to be either darker or brighter. In addition, having a lower chance of experiencing a burn-in with LCD screens means that it has a lower chance to experience a serious damage that probably would be permanent.

Sure, having better response times make LED screens more attractive for the gamers, but that’s not something that can’t be fixed. Recently, LCD screens also include an active matrix display. With the usage of them, the current in an active matrix display can be switched on and off more rapidly, therefore improving the screens refresh time. This feature makes LCD screens a perfect alternative for gaming computers. For example, a recent model from Asus takes full advantage of this feature of LCD screens. It uses an IPS panel with high refresh rate and low response times that provides great pictures and low response times.

Choosing a Monitor: What to Pay Attention to?

LCD- and LED-monitors are both liquid-crystal and there’s no significant difference between them. According to this article, and a comprehensive monitor guide from WiredShopper, when selecting a monitor you have to consider:

LED or LCD monitor for gaming – what’s the verdict?

Everyone is free to choose their own monitor, but with the above mentioned in mind, LED-screens stand out in comparison with LCD-monitors. The only drawback is that the cost is quite high. However, for excellent quality, safety and environmental friendliness one can pay more for it. The choice of LED- or LCD-screen depends only on financial capabilities. If you’re looking for more of a budget device, you can view the current best gaming monitors under $200 at LaptopUnboxed. There’s a range of options to choose from – including both LED and LCD screens – to give you a great visual experience at a reasonable price.

Originally published on June 1, 2017 in Gadgets