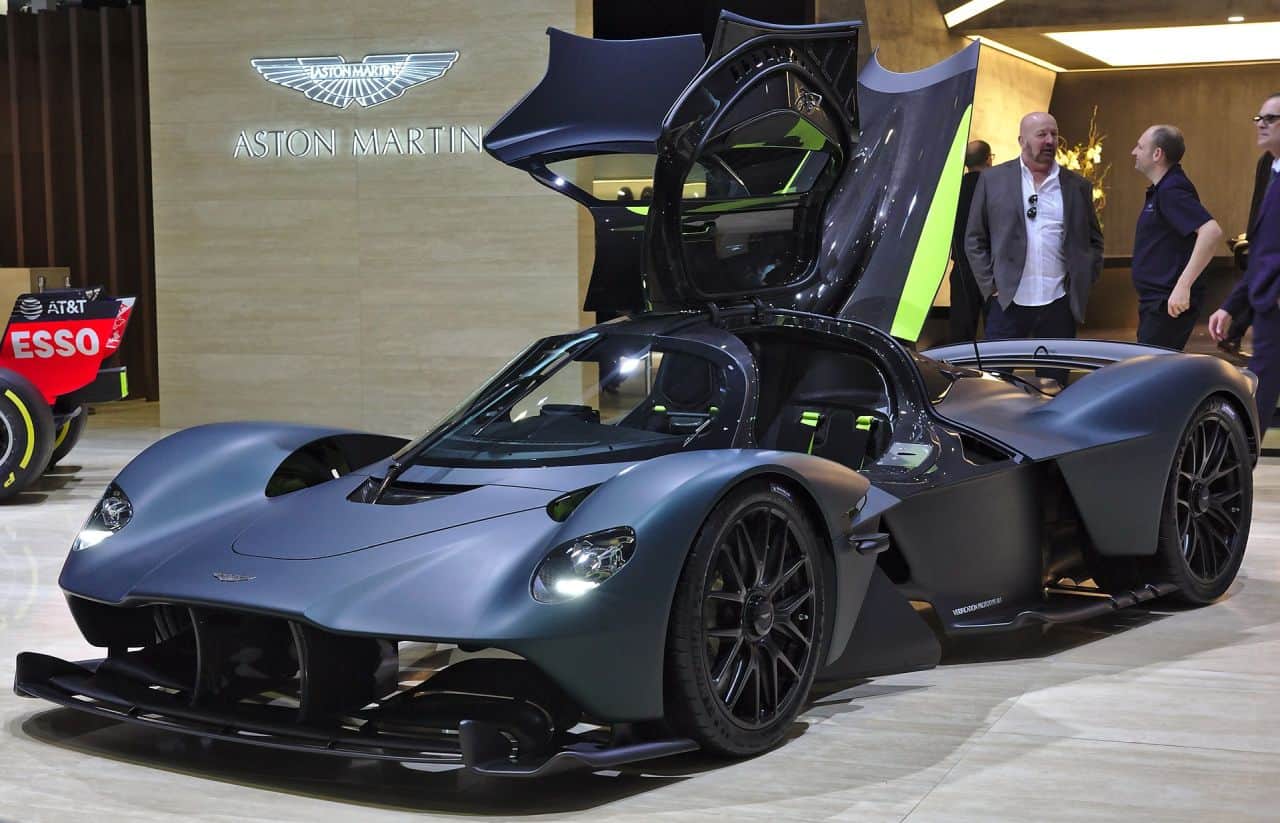 Aston Martin, the British racing giant, decided to collaborate with Red Bull Racing to bring their Formula-1 technology to the roads with the Valkyrie supercar. The main goal was to keep it usable on the street, and claimed it to be the fastest street-legal car in the world. The Valkyrie is also not short of pedigree, involving Red Bull Racing’s engineers and F1 designers to develop the Valkyrie.

Initially unveiled as the AM-RB 001 concept back in 2016, the “Valkyrie” name was christened a year later after its first production run. After the infamous part failure at Goodwood, Aston Martin has significantly improved the Valkyrie and released it in both a coupe and a track-ready model. But now, the Aston Martin Valkyrie Spider is unveiled which is basically an open-top version of the regular model without the roof and gullwing doors. Like the regular model which was limited to just 150 units, only 85 Aston Martin Valkyrie Spiders will be made.

Like most roof-less models, Aston Martin had to do some revisions to the chassis, which is basically a lightweight carbon fiber tub on the Valkyrie. The active aerodynamic elements and chassis systems were also revamped to accommodate the roofless design. With the roof off, the occupants can experience the V12 soundtrack in all its glory, revving over 11,000 RPM.

As expected, the removable roof is also engineered to perform like the regular model and is made of carbon fiber with polycarbonate panels to let light in. The central panel directly latches onto the front windshield and the rear panel. It also integrates a pair of windows that are hinged on either side. Because of its unconventional design and limited space, the roof is not automatic and needs to be taken off manually. To keep the Valkyrie Spider just as capable as the regular model, Aston Martin has done some clever engineering and kept weight to a minimum. The Valkyrie gets an all-carbon-fiber construction with a carbon fiber monocell.

Unfortunately, the gullwing doors were replaced with butterfly doors hinged at the front, which still looks just as good. Unlike Pagani which had to resort to conventional doors with the roadster model, Aston Martin has managed to keep the Valkyrie Spider looking exotic like a hypercar should.  The roof can also be taken off and stowed away easily with the doors open.

To compensate for the reduced structural rigidity at the roof, the chassis has been reinforced. Even with the major surgery, the Valkyrie Spider retains its aerodynamic abilities even with the roof. All aerodynamic elements including the teardrop-shaped cabin and Venturi tunnels are retained.

The Valkyrie Spider also used the same powertrain, employing a massive 6.5L Cosworth V12 engine coupled with an electric motor developed by IntegralPowertrain Ltd for a total output of 1140 hp and 664 lb-ft of torque. The motor itself develops 160 hp and 280 lb-ft of torque and is paired to a 40kWh battery from Rimac for a KERS style assist system. The engine revs to an astronomical 11200 RPM at full chat. It is also the most powerful naturally aspirated engine on sale today.

All the power is sent to the rear wheels through a 7-speed Ricardo single-clutch automated manual transmission.

On the inside, the Valkyrie can seat two passengers. But, the teardrop-style cabin does limit space. The passengers sit inside the car, in a reclined position similar to Formula-1 race cars. Instead of standard three-point seatbelts, the Valkyrie gets a 4 point harness with the option of a 6 point if you plan on doing a lot of track days. Like the regular model, the seats can be scanned and formed according to the owner’s body shape for getting comfortable in the narrow cabin.

The exterior is reminiscent of modern race cars with a narrow cabin, massive spoiler, and huge Venturi tunnels to direct air over the body. The tunnels themselves produce over 4000 pounds of downforce at high speeds. A large front splitter and rear diffuser are also provided to aid aerodynamics. Similar to Formula-1 cars, the exhaust outlets are also positioned at the top near the engine compartment. Even the wheels are designed with aerodynamics in mind and are made of lightweight magnesium alloy with Michelin Sport Cup 2 tires.

Aston Martin also claims better performance than the regular model which does the sprint to 60 MPH in just 2.5 seconds. However, the official acceleration numbers haven’t been revealed yet. The Valkyrie Spider will be available in both left-hand and right-hand drive markets. Similar to the Ferrari 458 all those years ago, all the controls and switchgear are placed in the steering wheel, which can be intimidating at first. The steering wheel is also detachable for easier cabin access.

Instead of a traditional dashboard, the Valkyrie gets an OLED display Integrated into the steering wheel. A separate central floating display is also provided for all the other functions. To keep aerodynamics in check, the rear-view mirrors are replaced with cameras, and displays are placed on either side of the dashboard. The conventional rearview mirror is also replaced with a display.

Despite being a road-going supercar, don’t expect refinement and comfort from the Valkyrie like a typical Aston martin. From the moment the engine is started and settles at 1,200 RPM, it sounds like a racecar. Vibrations also creep in substantially since the engine is mounted directly to the carbon-fiber tub.

Prices have also not been revealed yet, but expect it to cost more than $3.5 million since the regular model starts at $3 million, and the AMR Pro model costs $3.5 million. . But, the company has already allocated all 85 copies that will be made to buyers. Production is set to start later in the second quarter of 2022.