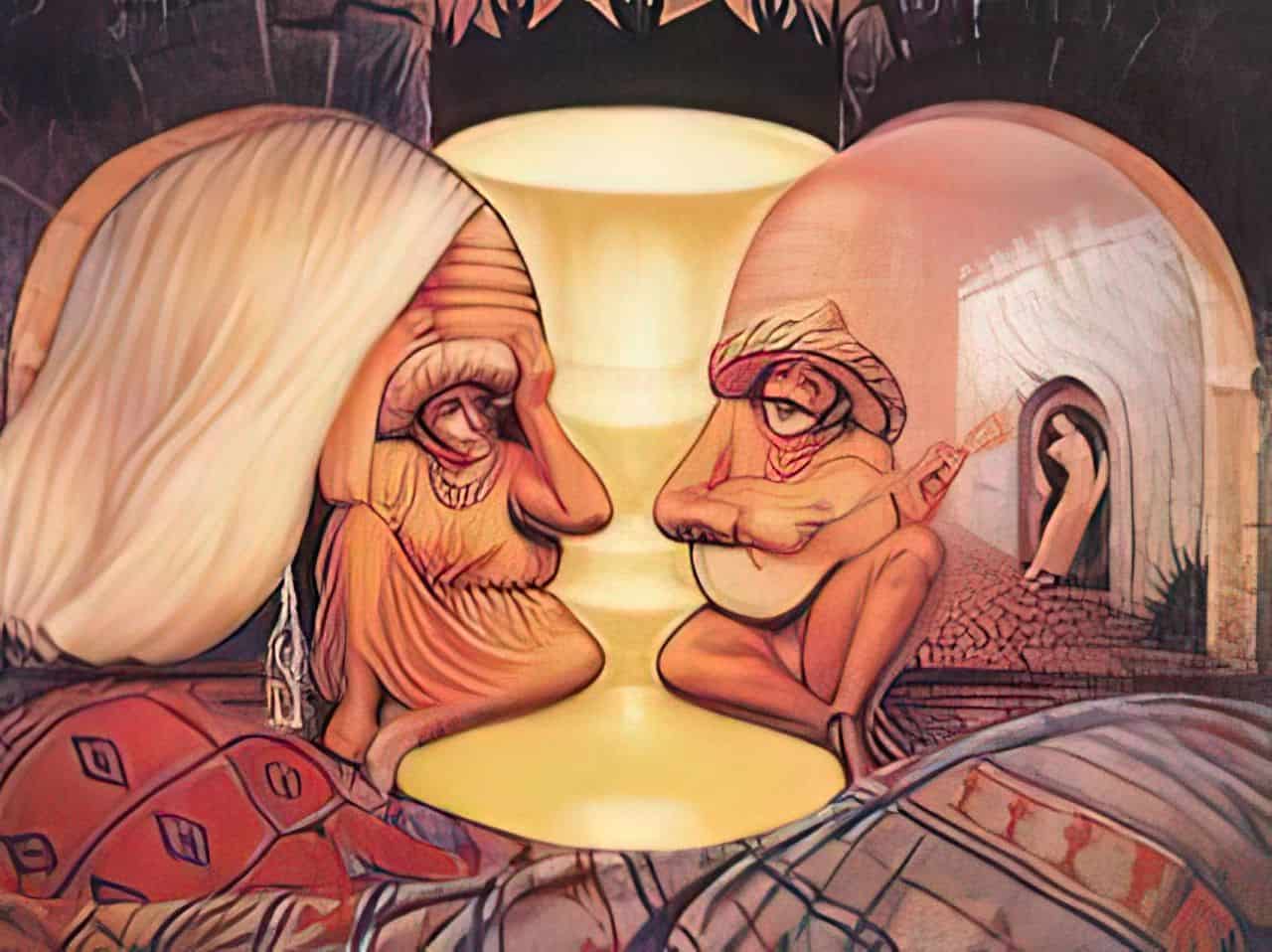 What do you see when you look at these pictures? At first glance, they may just seem like ordinary photos. But take a second look and you’ll see that there’s something strange going on! These are examples of face illusions, which are optical illusions that involve the human face. Our brains are amazing things, and they can be tricked into seeing things that aren’t really there.

In this article, I’ll introduce you to 19 of the best face illusions. These are my personal favorites, and because I could only find low-quality versions of them elsewhere, I went ahead and upscaled them using AI so that we could all enjoy much higher resolution versions of them.

So with that in mind, prepare to have your mind blown!

This is a classic example of an optical illusion. If you look at the picture, you will see seven different faces. But if you look closely, you’ll realize that there are only three faces in the picture! Can you spot them all?

This is another example of an optical illusion. At first glance, you will see 11 different faces. But if you look closely, you’ll realize that there are only four faces in the picture! Can you spot them all?

After a Few Beers

This is another famous illusion, where if you turn the image upside down, you can see how men (allegedly) see women after 6 beers.

Can you see the face in this illusion? It’s hidden among the coffee beans!

This one is a profile of Salvador Dali and a mysterious woman. If you can’t see the illusion, focus on the head of the woman.

How many faces do you see? This illusion painting by Octavio Ocampo features the face of Don Quijote, but it’s hidden among the other faces in the painting! It’s my favorite of the bunch.

Fight in the Head

Perhaps you’ve seen the legendary St. George before, but did you know that he was also a skilled dragon slayer? This famous painting by Sandro Del-Prete depicts St. George in the midst of slaying a fire-breathing dragon.

‘Faces of Mars’ is one of the most famous examples of pareidolia, which is when our brains see faces in random patterns. This photo was taken of Mars by the Viking 1 orbiter on July 20th, 1976.

This painting by G. H. Fischer is another example of pareidolia. Can you see the hidden faces in the picture? There’s a mother, father, and daughter hidden among the larger face.

This is one of the hardest in this illusion gallery. Can you spot the farmer’s wife? You may need to turn the photo upside down.

Faces in the Flowers

This is another example of pareidolia. I’m sure you can see a theme forming here…

Can you see the faces in the flowers?

A Face Made of Flowers

This is a beautiful painting by Edouard Manet. Can you see the face made of flowers in the center? There’s only one face here, and it’s pretty obvious, but it’s still a great optical illusion.

This is one of my favorite face illusions. It’s called ‘Rubin’s Goblet’, and it was created by the Danish artist Vilem Rubin. Can you see the hidden faces in the picture?

A Woman and Her Child

This rocky outcropping at the edge of a lake in Norway looks like a woman holding her child. If you’re having trouble seeing it, focus on the point where the reflection meets the edge of the lake.

This is a famous face illusion that has been around for many years. Can you see the old woman or the young woman? You can’t see both at the same time!

An old couple embracing each other, this painting by Octavio Ocampo is a beautiful example of an optical illusion. Can you see the hidden faces in the painting?

The Saxophone Player and the Woman

This is another classic that you may recognize from elementary school. Look carefully and you’ll see both a woman and a saxophone player and a young woman.

This is a great example of an optical illusion. It’s called ‘The Bending Soldier’, and – depending on how you look at it – shows a soldier staring off into the distance, or a man bending over to stretch.

The Spirit of the Woods

This wooded grove by Sandro Del Prete looks like it’s teeming with spirits! Can you see the hidden faces in the trees? Hope you’re not too stumped by this one.

Face illusions are a great way to trick your brain, and they’re also a lot of fun. I hope you enjoyed this gallery of some of the best face illusions out there! Thanks for looking.

Did you find all of the faces? Which one was your favorite? Let me know in the comments below! Until next time, keep on trickin’ your brain!

How To Choose The Right Wall Decor For Your Style

Can you run DeVops with offshore development teams?