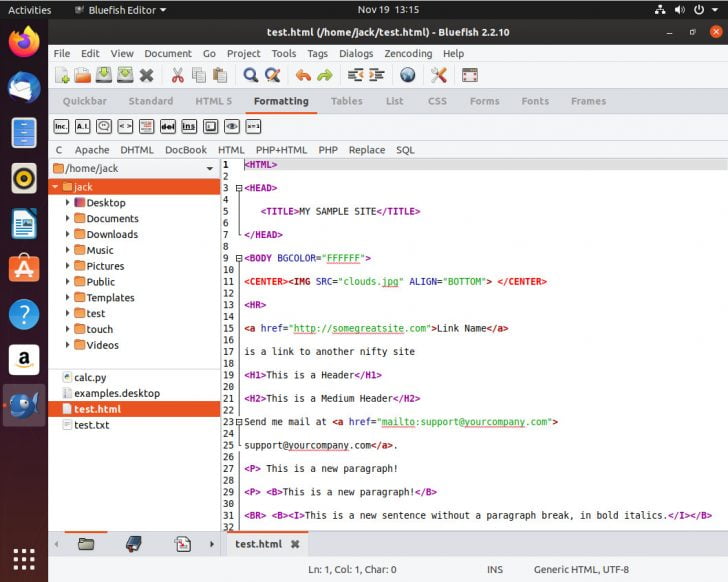 Linux is a powerful platform for servers and desktops alike. Ask an IT administrator in nearly any company and they’ll quickly rattle off the benefits of the flagship open source operating system. But it’s not just admins who have a long-standing love affair with Linux. Many developers across the globe also depend on Linux to get their work done.

But what software do those developers use? Let’s take a look at some of the better tools available for Linux. We’ll examine tools for varying programming languages, and we’ll focus only on tools that are directly available for Linux (without having to use an abstraction layer such as Wine).

Visual Studio Code is a code editor with a sleek, modern design and includes the ability to add nearly 15k extensions for tons of different languages. Visual Studio Code also includes an interactive debugger, a code explorer, a powerful search feature, and more. But one of the reasons why Visual Studio Code winds up at the top of many a list of such tools is the outstanding user interface (Figure 1).

Along with the friendly UI, Visual Studio Code offers a frictionless edit-build-debug

Sublime Text is a sophisticated text editor used for code, markup, and general text editing. It’s a tool that any developer, such as those working with outsource Java development, would be right at home using.

Sublime has native support for a few dozen programming languages, so chances are it’ll meet your needs out of the box.

Any Linux web developer will tell you that one of their go-to tools is Bluefish Editor. Along with an easy to use (although slightly outdated) interface for HTML coding (Figure 3), Bluefish Editor includes support for languages like Ada, ASP .NET and VBS, C/C++, CFML, Clojure, D, gettext PO, Google Go, XHTML, HTML5, Java and JSP, JavaScript and jQuery, Lua, and more.

Atom was developed by Github. Although at first blush, it appears to be a fantastic code editor because of its ability to integrate with Git, it is also considered an IDE. The one misconception, however, is that Atom seamlessly integrates with your GitHub account. It doesn’t. Instead, you must first sync your projects using Git. Once you’ve done that, you can work on your GitHub projects via locally stored copies.

Atom’s feature list is impressive, including a built-in package manager with over 6,000 installable packages and themes, autocomplete, tree/settings views, minimap, drag and drop support in tree view, user customization, and more. It’s the user customization that makes Atom stand out. By customizing this tool, you can make it exactly what you need.

But even without customization, Atom is quite easy to use (Figure 4).

Eclipse is a full-blown IDE and is one of the more popular tools for developing on Linux. It works with C, C++, COBOL, Fortran, Haskell, JavaScript, PHP, Perl, Python, R, Ruby, Ruby on Rails, Scheme, and much more. Eclipse is built with Java, is free, open source, and includes a full range of Java developer tools, all packaged in a user-friendly GUI (Figure 5).

Eclipse includes a powerful plugin architecture to extend its range of capabilities. This IDE also uses a built-in incremental compiler, which runs every time a file is loaded or code is updated. Because of this, Eclipse might require more system resources (CPU and RAM) than other IDEs. However, this incremental compiler also provides error indicators as you code, so in the long run, it’s worth the overhead.

And there you have it, five developer tools that can help take your projects to the next level on Linux. Whether you’re looking for an editor or an IDE, Linux has you covered. But don’t think these are the only tools on the Linux market. With a quick search, you’ll find plenty more.

Originally published on November 22, 2019 in Software