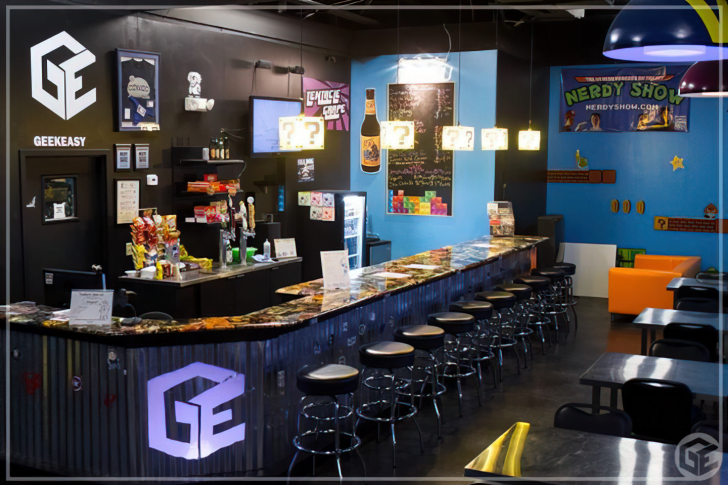 What’s Geek Easy Bar all About?

The Geek Easy, opened in 2013, is a bar adaptation to the popular comic shop, aptly titled “A Comic Shop”, which was founded in 2006 by Aaron Haaland. As by its name, The Geek Easy aims to please nerds, geeks, friends and family worldwide with its world-renowned talent that it has attracted to its sports bar – without any sports. The Geek Easy and A Comic Shop are located at 114 S. Semoran Boulevard, Orlando, Florida 32792.

A Comic Shop has won the title of “Best Comic Shop” for 7 years, and has also been nominated for an Eisner award – a prize given for creative achievement in American comic books, and is sometimes referred to as the comics industry’s equivalent of the Academy Awards.

Due to The Geek Easy’s equally renowned popularity, the bar inside of a comic shop is in need of an expansion, and its owners have taken to indiegogo.com to acquire funding for its great evolution. No matter what, August 1st will mark the unveiling of The Geek Easy’s new renovation plans, and a few donations will help speed up the process.

A marvelous amount of fun and entertainment for all things nerdy. The Geek Easy is home to weekly events such as Nerd Trivia, Nerdy Karaoke, and much more. The all-authentic brand has no corporations behind it, and will always be that way. This means there is no limit to the world-renowned acts that can perform on their bright stage, and no ceiling too high for a good time. This bar is living proof that Disney doesn’t own all of the best places in Orlando, Florida.

The donation campaign is set to improve the entire venue tenfold, as the perfect comic shop and geek venue combo. Founder Aaron Haaland has “always wanted to have a place where comic lovers could belong and share their passion with others”, and his dream is being realized soon enough with help from generous donors in the coming months.

Construction permits, new furnishings, new flooring, fresh paint, along with new and better equipment is the first step to making the venue feel more like the nerdy paradise it was intended to be. The $30,000 goal is a huge leap in terms of obtaining a larger cooler to provide more beer taps for draft beer; a better sound system and stage for brighter, more luxurious acts; almost double the space which paves the way for a larger kitchen and an expanded menu; and its own bathroom. And these game-changing renovations are only the tip of the iceberg.

The bar inside of A Comic Shop has been a very successful idea, making it wild with modern nightlife during weekly events, and exactly the traditional relaxing evening of a geek that we all need sometimes. A vast venue for gaming, drinking, dancing, conversing about your favorite useless knowledge, or simply hanging out to read a comic book from the shop next door is a geek’s dream, and at The Geek Easy you’re living it. Plus, it’s getting even better.

With these new floor plans, A Comic Shop may shrink in size, however it will be getting a huge overhaul. The whole area will be renovated with better shelving, new toys will have fancy glass displays, staff members Eric and Oral will have a shiny new counter, and other classic renovations from The Geek Easy will carry over. This means new flooring, colorful fresh paint, and a new and improved bathroom.

Currently the campaign is supported by 228 backers, and has a whopping total of $13,491 raised towards the $30,000 goal. Backing the funding for the expansion gets you a whole wealth of different rewards, which include but are not limited to:

See their indiegogo page to take A Comic Shop and The Geek Easy to the next level of entertainment, you don’t want to miss out on this.