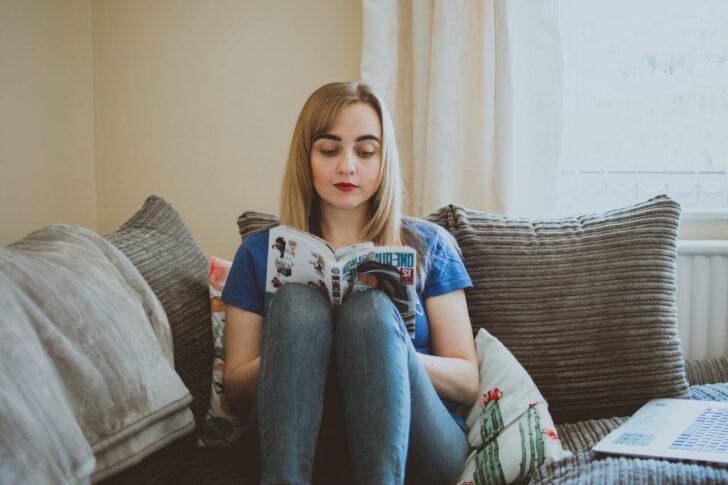 How I Bonded With My Stepmom Over Manga

I have lived alone with my stepmom in a house in the suburbs for 2 years now. My house. It says as much on my dad’s will. I only let Isabella stay here because she’s nice and can cook. The moment I so much as suspect that she has any plans of doing anything suspicious, I have the legal right to kick her out, I think.

Yes, I live with a woman alone. Every time I mention this to my friends at school, I earn myself a giggle or two. You 15-year old boys are the scourge of the earth, Isabella always says. Just this once, I agree.

No matter what they think, I’d never, you know, with my stepmom. It’s gross to even think about it. Not that Isabella is old. My dad had a good eye for women, I’ll give him that. She wouldn’t look out of place next to Miss World on the cover of Forbes.

Our relationship was most strained at the beginning, just after dad died. I didn’t want her to replace my mum, she didn’t know what to do with me. We both had nowhere else to go, so we’ve been under a truce of circumstance ever since. We split both the chores and TV halfway. It was a rocky peace (How many times did I tell you to…!) but it was peaceful nonetheless.

Now, I’m a weeb. An Otaku, an anime head, call it whatever you want. I love Japanese culture. I’ve got the entire Shonen Jump Naruto collection (both Shippuden and the earlier one) in my physical library as well as subscriptions to all the major anime and manga publishers.

I keep all my manga in my room. One day I came back from school to see that the Naruto volumes were all mixed up. Isabella always cleaned my room, but she’d never meddled before. I had half a mind to go downstairs and name my stepmom a Manga Destroyer. However, I decided to let it pass, arranged the volumes she mixed up, and waited to see what she would do next.

2 weeks passed. I was fairly certain that she was done with her Stepmom Manga Meddling™. One Friday afternoon, though, I came back home to see the second volume of the collection upside down on the shelf. I really care about my collection, so I went downstairs to confront my stepmom holding the manga in my hand.

“Hi,” I said to her when I got downstairs. “I noticed you cleaned my room. Thanks.”

“Is that casserole still in the freezer?”

“I noticed something else,” I said, holding up the book.

“Oh,” Isabella said, her cheeks turning pink. “I didn’t want to intrude, but it looked so… colourful”

“It’s okay. It looks that way because it’s a carefully preserved collector’s edition. I just wanted to give you a heads up before you damaged it”

That’s when I got an idea.

“Hey, Isabella,” I said as I saw an opportunity to find common ground. “You don’t need to drop $200. You can just get a subscription to read them online.”

“Really? Show me how!” She replied, visibly excited. It turned out that she’d spent a lot of her University days watching Dragon Ball reruns on cable. When she left school, she just never got around to finding other anime or manga to consume. I helped my stepmom/resident manga consumer to set up accounts on all the same sites I had logins for, then downloaded a few volumes to her iPad so she could read them later.

“Thank you, Jared,” she said when I was done, hugging me.

My stepmom took to manga faster than an ant to sugar. She now reads more series than I do, and I use her as a reminder sometimes when I forget to download new volumes.