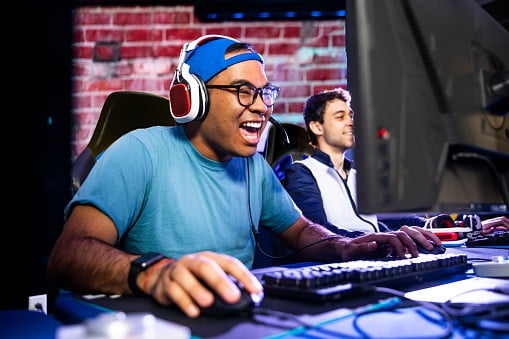 A young Hispanic man gaming with his friends

The world of cybersports is becoming one of the most promising industries for investors. Bookmakers are taking esports betting Vulkan on all sports online. As recently as last year, betting on cyber sports was valued at between €25 billion and €45 billion. Which disciplines are leading the way.

LoL is a competitive game in the MOBA (Multiplayer Online Battle Arena) genre that combines strategy and RPG features.

Riot Games has built a cyber-sports infrastructure that includes regional leagues around the world and two major international tournaments:

In past years new records in terms of spectator statistics and League of Legends Vulkan have been set by leagues in Europe and South America. The main regional competitions are

The most popular is LoL Champions Korea. The league is constantly updating records, the most recent being 1 million viewers at this year’s spring split.

Overall, CS:GO has been able to continue to grow as an eSports discipline on streaming services. Serious competition to the shooter now comes from Valorant, where American and some European eSports players are leaving.

Special mention should be made of the activity of Brazilian fans of the game. In 2020, Brazil’s most popular content-maker Twitch Gaules began collaborating with tournament operators on a regular basis to host Portuguese-language broadcasts – this has attracted a large number of new viewers.

Blizzard’s PvP card game with deck-building has a rather high entry threshold. Not all gamers can figure out its rules. However, those who enjoy card games stay in Hearthstone for a long time.

Hearthstone has a strongly developed professional scene. In the 7 years of its existence more than $25 million has been raised in different tournaments. There are tournaments with insignificant prize money for novice cybersportmen, but the players from the high echelon are fighting for hundreds of thousands of dollars. At the Hearthstone World Championship, for example, gamers are fighting for a fund of up to one million dollars.

Another one created from Blizzard. Overwatch was released two years later than Hearthstone, but has already managed to overtake its corporate counterpart. Overwatch is much more comprehensible to the average gamer – the entry threshold to the shooter is noticeably lower than the card game.

There have been several tournaments in Overwatch history where more than one million dollars has been raffled off. The most cash was Overwatch League Season 2 Playoffs with a prize pool of $3.5 million. The Korean-American team that took first place earned $1.1 million. In total, in the 5 years of Overwatch’s existence, the eSports players have drawn over $27 million.

Unlike other popular disciplines, PUBG Mobile has been active in the Middle East with tournaments in countries such as:

However, the game’s main region still remains Asia. The discipline’s premier tournament was the PUBG Mobile World League 2020 East with 1.15 million spectators at its peak.

6 Ways to Increase Sexual Intimacy With a Long-Term Partner