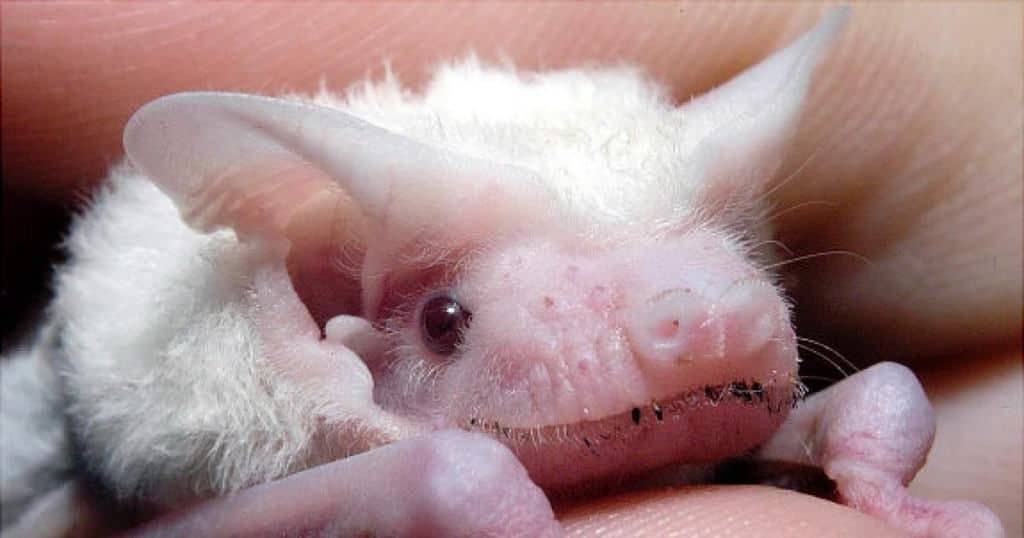 Is it a bird? Is it a plane? Is it a white, fluffy, flying ball of candyfloss? Unfortunately not candyfloss fans, although it is a spotting of a rare albino bat that has only been spotted across the world a handful of times.

Whilst we’re used to the hairy, black flying mammals that hang upside down on trees, come out after dark and turn into vampires at night, the albino bat is quite the opposite. With pale white skin, light pink eyes, and fair fluffy skin, the sighting of an albino bat might come as quite a surprise.

Over the past few years, the frequent use of photo editing apps and Photoshop have led to many false sightings of the strange creature. But, dedicated bat lovers have caught on camera the rare animal and the truth is finally out there – the albino bat does exist.

What does ‘albino’ mean?

As well as people and animals with albinism usually having very fair or white hair, they can sometimes have pale pink eyes. This is due to the blood vessels showing through the iris of the eye and tinting the color.

What is an ‘albino’ bat?

There are many species of bats, and albino bats can be found in any species. For example, an albino bat found in Scotland, UK, turned out to be a pipistrelle.

As the albino features in a bat are extremely rare, researchers studying groups of bats find a discovery of an albino bat to be incredibly exciting. As albinism is a genetic condition, if one is found in a group, there is the likelihood that there may be others.

Spottings in the UK

In the UK, the white, fluffy creature with wings was filmed by a Scotsman in his garden. As he saw something clinging to his garden wall, the intrigued Brit raced to see what it was.

With photographic evidence, the local Bat Group was able to confirm the sighting of the rare albino bat, and note that it was only the sixth or seventh sighting of the creature in the UK. You can only imagine how excited the members of the Bat Committee were.

As bats are generally nocturnal animals, the onlooker was surprised to find the strange creature flapping about in the daylight sun. According to the source, the bat looked tired and confused, almost hinting that it was lost.

After some prompting and a recording of the homeless creature in his garden, it was suggested that he take the albino bat to the local Bat Committee, which caused quite the excitement.

However, at the time when the albino bat was spotted, it was coming towards hibernation season. Sadly, the researchers were unable to continue looking for more albino furry friends and are aiming to head back to the same location next year.

However, experts have noted how many albino bats might not last long in the wild. Due to their strikingly white appearance, they are more vulnerable to predators and could face a tough life in the wild.

“The chances of survival are lower than normal. Because of its lighter color it’s more likely to be attacked by a cat or an owl. Pipistrelles can live for 16 years, but this one isn’t likely to,” Dr Amanda Wilson said, speaking to the BBC when a rare albino pipistrelle bat was spotted in Monikie, Scotland.

In South Korea, an albino bat was spotted dangling upside down in a cave at Odaesan National Park. Covered head to toe in fluffy white fur, the wings of the bat were thinly wrapped around its body, with light pink veins visible.

At a mere 6cm long, the creature was discovered to be a regular horseshoe bat, which is fairly common in Korea. Its genetic condition of albinism had caused it to become totally white in color.

Albino bats found in Korea generally stand out from the crowd, and as this one was hibernating with over 60 grey bats, it made quite the contrast when spectators walked by.

Upon the discovery of the albino bat in Korea, eagle-eyed animal experts and researchers have longed to find other peculiar and unique species of bat. Their observations have led them to find types such as the orange-whiskered and long-eared bat, which has undoubtedly pleased many.

So, what is the truth with the albino bats? Sightings are rare, but it’s believed these cute and fluffy creatures can be found in some corners of the earth. It’s just knowing where to find them – and having the beady eye to spot them!