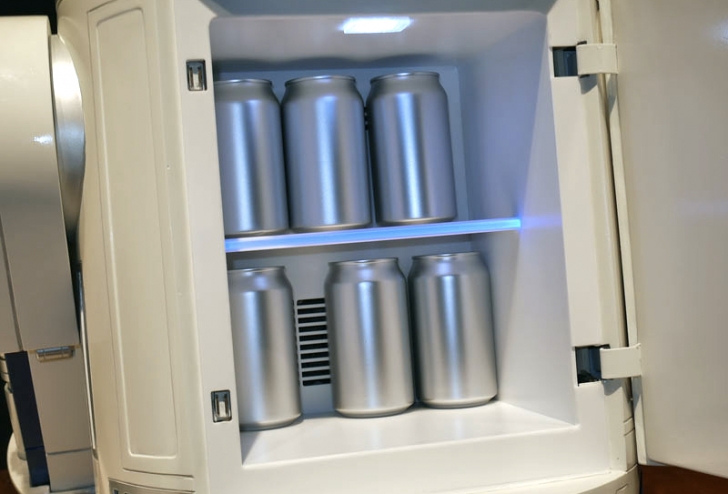 Types of Outdoor Fridges for Every Space and Budget

The first devices for cooling food and drinks appeared several thousand years ago in Ancient Egypt and China. In most cases, ancient refrigerators had containers: the smaller one with food was placed in a larger one, partially filled with ice or cold water. It’s obvious that such an appliance was available just too rich people and was not only a luxury item but also a work of art.

The scientific and technological revolution of the 19th century also contributed to the technology of freezing food. Thus, since 1850, in prototypes and industrial samples and since 1913, in household refrigerators, so-called heat pumps were used. These were special devices that transferred heat from the working (refrigerating or freezer) chamber to the external environment.

The possibility of long-term preservation of food freshness was appreciated, so by the middle 20th century, the refrigerator was in almost every American family, 30% of hosts from Western Europe had it too.

Today’s families can choose from a variety of models of different colors and sizes. However, despite their infinite variety, the technology of refrigeration and freezing of food and drinks in almost all refrigerators has been unchanged for half a century.

According to information over here, a total of four types of refrigerators can be distinguished as home ones: compression, absorption, thermoelectric, and whirlwind fridges.

In the latter, an extremely rare type, which didn’t exceed the limits of prototypes and test installations, cooling is carried out by expanding the compressed air in special chambers – swirl coolers. These appliances were reliable and safe, but they had extremely low efficiency, were noisy, and therefore had almost no chance of success, especially in the home.

The second type of appliances, absorption fridges, was designed by Albert Einstein. It cools the chambers by evaporating ammonia. They got their name because the refrigerant circulation takes place in the process of its dissolution in the liquid, most often in water. For the further operation of the refrigerator, this solution is divided into water and ammonia, after which the latter is liquefied, then evaporated, and dissolved again in water. Then the cycle repeats from the very beginning.

In contrast to swirl refrigerators, absorption ones are almost silent, and most designs also lack moving parts. Models based on this principle have a rather exotic feature for household appliances, they can work not on electricity, but on fuel, such as wood. This allows you to take such refrigerators, for example, on a hike, camping or the beach. Despite the advantages, there were some disadvantages as well: relatively low productivity, as well as the potential danger of poisoning with toxic substances.

The thermoelectric refrigerator is based on the Peltier effect – cooling the point of contact of two different conductors during the passage of electric current. Fridges on such elements are reliable, silent, but quite expensive and extremely inefficient compared to other heat pumps. Nevertheless, they can be found in car chillers, water coolers, and computer coolers.

Compression refrigerators are the most common in everyday life. They are based on the property of the substance to absorb heat during evaporation. The refrigerant (safe gas freon) boils in the evaporator, thus cooling the air in the inner chamber. To complete the cycle, it must be converted back into the liquid. This occurs when the compressor is pressurized in the condenser, and heat is released. Condensers can be placed in the back both in the open form (the grid is familiar to all) and in the closed-form (the condenser is protected by a special plate, and ventilation holes are provided for effective heat exchange from above). In addition, some manufacturers place the condenser on the sidewalls, which allows you to install the refrigerator against the wall.

There are refrigerators on the market equipped with both one and two compressors. In the latter case, an autonomous cooling system is implemented in each chamber (refrigerating and freezer), which allows you to independently regulate the temperature and switch off unused chambers. This can be useful, for example, in case of a long vacation or when there is no need to freeze and store food for a long time.

Single-compressor refrigerators use a solenoid valve to regulate the refrigerant supply to the evaporators for separate control of the chambers. For consumers, this means that they won’t notice any difference in operation compared to two-compressor models. The only difference is that the freezer cannot be switched off.

In general, two-compressor models are slightly more expensive, less reliable (due to the higher number of elements and, consequently, a higher probability of breakage), but potentially have the advantage that if one compressor fails, the second one will continue to function.

All refrigerators, even the most modern ones, require regular maintenance. First of all, it’s due to the fact that frost freezes on evaporators. There are only a few systems that solve this problem successfully.

The most common is the drip system. A refrigerator with such a system works in the following way: the evaporator on the back wall cools the refrigerating chamber, but at the same time it produces frost. At one stage of the refrigerator operation, the compressor and cooling stop, and the frost melt turning into water that flows down the drain system into a special container near the compressor. This container then heats up, and the water evaporates. It’s obvious that the humidity in the refrigerating chamber is high enough.

In this case, you should defrost the freezer compartment from several times a year to once every few years, depending on the operating conditions – load, humidity, frequency of opening the door, and other factors. These devices are theoretically more reliable than forced-cooled models because the system is simpler.

The second type is mixed cooling, where the cooling chamber is defrosted automatically (drip system) and the freezer is defrosted with an electric heater. Depending on the manufacturer, this combined system can be called No Frost, Frost Free, etc.

The third, technically more complex system is based on cooling products with cold air flows. The evaporator hidden behind the wall cools both chambers with special fans. Its temperature is slightly lower than inside the chambers, and so the frost freezes only on it. Defrosting, as in the case of the combined system, is due to a special heater. As a result, the walls of the refrigerator chambers equipped with such a system don’t freeze, which greatly facilitates maintenance. Marketing names are Full No Frost, Full Frost Free, etc.

Despite its apparent simplicity, the shelves play an important role in the refrigerator’s operation. The fact is that the old, lattice shelves, for all their many disadvantages, had one serious advantage: they provided a quality air circulation, and thus more even cooling.

Modern shelves made of tempered glass are very comfortable, beautiful, and hygienic, but they significantly complicate the convection of air. Therefore, many manufacturers equip their appliances with forced ventilation to ensure quality air mixing. As a rule, each solution gets a marketing name and presented as a significant improvement, for example, Multi Air Flow, Dynamic Air Flow, etc.

Additional functions of the cooling system

Some models are equipped with a super-freezer function, which allows the freezer compartment to be cooled down even more. This prevents the temperature from rising and the food already stored from thawing when new products are added. In addition, the reduced temperature ensures fast freezing, which means that the useful properties of the food can be better preserved. A similar function exists for the refrigerating chamber.

A significant extension of the refrigerator’s functionality is, of course, the so-called freshness zone. Such a zone is a separate chamber or a cell, in which the temperature is kept close to zero. This makes it possible to maintain the freshness of food for a long time without freezing. An optimal solution is to have a separate chamber that looks like a refrigerating chamber but is smaller in size. This separation allows temperature and humidity to be maintained efficiently.

Typically, there are two zones of freshness:

The icemaker, a special device that automatically prepares the ice, can be another pleasant addition. As a rule, such refrigerators are directly connected to a cold water source, which is filtered to improve the ice quality. In some cases, manufacturers make a special system of trays that provides minimal automation of ice production and call “icemakers” as well.