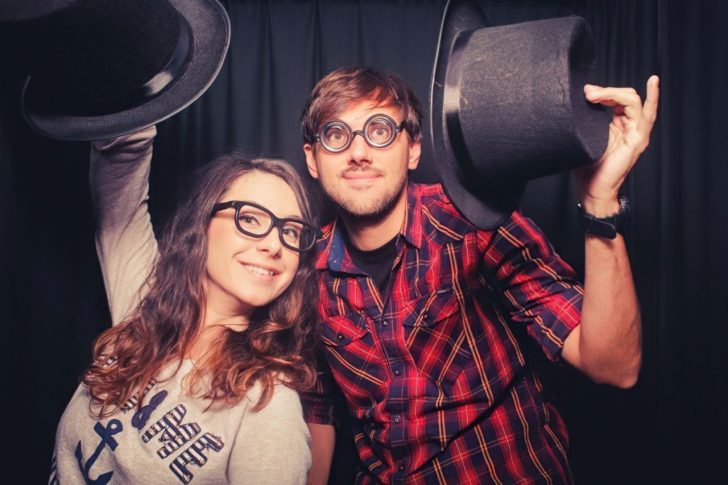 It’s amazing how something as simple as finding your soulmate can also be arguably one of the most stressful endeavors in your life. From trying to meet someone who shares similar values and interests with you, to carefully weeding through all of the duds who are trying to flag you down and get your attention, it’s almost as though your biology wants you to settle down, but your dating pool?

Well, let’s just say it’s choked to the brim with weeds and someone’s over there, doing their business off the diving board. Woof. What’s an attractive, witty, intelligent, and decidedly single person like yourself to do? First and foremost, don’t ever settle for less than you’re worth. And secondly? Close that dating app, step away from the blind dates your sweet nana keeps setting you up on, and take a close look around you.

Believe it or not, there’s a world of geeks out there, all vying for a chance at getting to know you better. And even better — science has just proven that geeks really do make the best partners! If you’re tired of being disappointed by lackluster lovers, and you’re finally ready to settle down with Mister or Missus Right, then you may be long overdue to meet the geek of your dreams.

Geeks Are More Kind and Sympathetic

It’s fairly well known that geeks can be considerably more introverted than their more outgoing, extroverted counterparts. (Of course, this is just a generalization; if you get a geek talking about the right subject, they just might talk your ear off!) However, despite the more popular stereotypes about introversion, it doesn’t necessarily mean that a geek is any less empathetic or kind. Rather, it actually suggests the complete opposite.

According to research, introverts are more inclined to be quiet, introspective, and thoughtful. They also prefer intimate company, and greatly favor one-on-one time over associating with large crowds. Not to be mistaken for a shy person, an introvert is reflective, self-aware, and has remarkable self-restraint.

When compared to a person who may be boisterous, loud, and thoughtless, why would anyone choose them over an introvert? With so many impressive qualities defining them, it’s clear that a geeky introvert is a far better match for someone who is looking for an ideal mate. With these qualities, it’s evident that your introverted geek will never raise his voice at you or treat you with hostility. What better partner could you ask for?

When you think about what your ideal bedroom partner is like, what comes to mind? Are you picturing some strapping Adonis (or Aphrodite) who can give your eyes all the much-needed visual stimuli they require to get into the mood? While a physically buff person may be nice to look at, the problem lies in the fact that they may not be the most attentive person between the sheets.

Now consider your average geek. Again, this isn’t to stereotype their attractiveness, but there is something incredibly alluring about geeks, bespectacled or not. And yes, some geeks do like to work out! Unlike the gym rat, though (who spent all of their time getting into shape), your geek has read all of the books about satisfying their partner’s needs. In other words, they don’t only walk the walk, but they talk the talk, too.

Plus, research has already shown that the more humble, much smarter partner is going to be the better match for you overall. Remember, geeks tend to be very passionate, whether it’s discussing whether or not Greedo shot first, or if the book version is actually better than the movie version (Jurassic Park would like to have a word, please). And that passion? It totally shows up in the bedroom, by the way.

Geeks Can Offer You Much-Needed Stability

Biologists have often argued that as humans, we’re not too far separated from our ancestors. Whether that’s true or not still remains to be seen, but there is one thing that does tend to be universally accepted. When it comes to finding a partner in life, nobody likes a freeloader. Indeed, studies have shown that when there’s a disparity in a relationship — whether emotional, financial, or intimate — conflict can arise.

Fortunately, geeks are the very antithesis of laziness, and they in fact tend to be quite hardworking, committed employees. Whether you can find them listed as “Staff of the Month” on their boss’s CPA website, or they’re laboring diligently away in some garage in Silicon Valley to invent some newfangled microchip, geeks will work hard to pull their own weight in the relationship.

No doubt, they will bring more than enough to the table, whether it’s fiscally or emotionally. The same can be said for their emotional stability, as well. Geeks tend to be more level-headed and rational, so you won’t have to worry about needless drama when you come home from a long day at work. Conversely, because they tend to be so reasonable, they’d be more than happy to offer a comforting shoulder when you need one.

Geeks Have a Fantastic Sense of Humor

Anyone who ever accused a geek of being some lofty, unreachable stoic has never met one before. While a geek’s wit may not be in the same realm as most people’s sense of humor, it doesn’t mean that they don’t know how to joke around and have fun. Geeks are incredibly clever, and for many, a perfectly placed pun is the pinnacle of pithy pontification (and did we mention, they also like alliteration?).

The problem arises, alas, when their jokes fall flat on the wrong ears, and other people don’t get the gist of their remarks. That’s why being in a relationship with a geek is such a great idea. It’s almost like using specially-branded compatibility SEO to find your soul mate. With a few strategically placed keywords — or in this case, hilarious jokes that only two people on the same wavelength could appreciate — you can sense you’re in the presence of a fellow geek and make your move.

Finding Your Very Own Geek

Trying to find true love can be an almost herculean challenge, one that isn’t for the faint of heart. Between trying to navigate the labyrinth of mediocre potential matches, to trying to find someone who just clicks with you, it’s easy to want to give up before you start. However, by taking the time to really open your eyes to all of the wonderfully geeky people out there, you can finally experience your very own happily ever after.