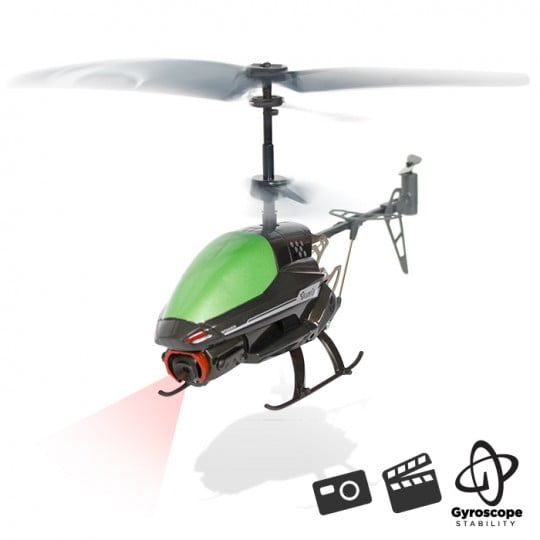 Recently I’ve taken an interest in remote controlled gadgets (cars, planes, and helicopters) and I came across the Silverlit I/R Spy Camera Helicopter.  The thing I like about this RC Helicopter is the addition of the camera which can be useful for taking video or pictures of hard to reach places, taking video from various angles like a Hollywood director, and of course spying on people (if you’re into that kind of a thing ;)).

The Silverlit I/R Spy Camera Helicopter comes in three frequencies, so if two of your friends also decide to buy them, the frequencies won’t interfere with each other.  The helicopter is equipped with an adjustable 1.3 megapixel camera which is built into the lightweight body of the chopper, so even if you’re spying on someone and they see the helicopter, the camera won’t stand out and you won’t be accused of spying.

The spy camera is activated by the push of a button on the remote control; the helicopter comes with a few gyroscopes to stabilize the camera for best video and picture shooting.  The video is stored on the 128 megabyte internal memory device and can be easily transferred to your PC with the included software.  The software also lets you adjust the video and allows you to post it to Facebook and Twitter.

The Silverlit I/R Spy Camera Helicopter is priced at £69.99 at firebox.com.