This little monkey is not just a monkey, it is a “Super Monkey”. Like many comic book super heroes, it is equipped with a mask and cape of its own. The only difference is that it is a real thing, not just a fictional character. You can own this 11” tall cutie for just
$6.99

When you slip your fingers in the secret pockets in its hands and pull it back by holding its legs and tail, it stretches like crazy and becomes an instant sling shot. When you release it, it flies like a screaming projectile catching the onlookers/unsuspecting targets by wonder and surprise. The scream appears to be filled with jubilation when the monkey is airborne and that of a protest if it crashes hard on landing. 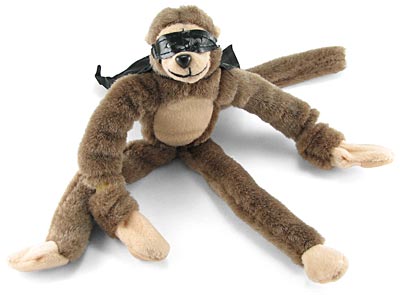 Originally published on August 3, 2016 in Toys