The padlock technology has not seen significant changes over the last several centuries. They are known to have been used dating back to Roman Era 500-300 BC. Padlocks have been used in China since the late Eastern Han Dynasty (25–220 AD). Since then they have evolved in several shapes and material, but the basic mechanism of key and lock has virtually remained the same.

Now F?Z Designs have come up with the concept of this 21st Century padlock that you don’t have to worry about losing your keys or forgetting the combination numbers to your padlocks anymore. Noke (No Key) is one of the first Bluetooth padlocks in the world that you can open simply with your smartphone via wireless Bluetooth technology. You can also share access with the other family members or friends safely and securely.

You don’t even have to remove your phone from your pocket or purse. When you click, it automatically searches for a compatible phone and key and unlocks. For protection of your bike there is a custom cable for your lock for an additional $20. If you don’t have your phone with you, you can create your own access code through its quick click technology.

The battery is easily replaceable and a single battery will last you 1 year. The water resistant outer shell will keep it safe from elements. Noke is currently being backed on kickstarter.com, the goal has been reached and you can reserve yourself a Noke padlock for $59. 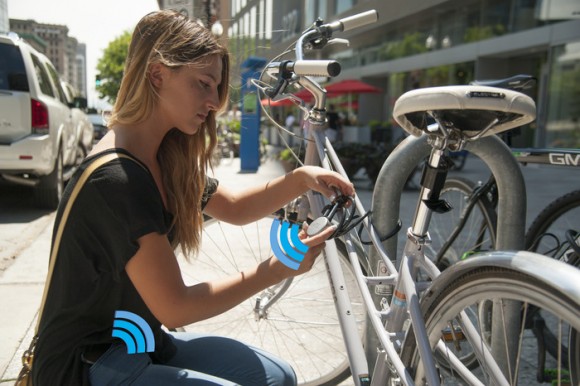 Originally published on September 5, 2014 in Gadgets