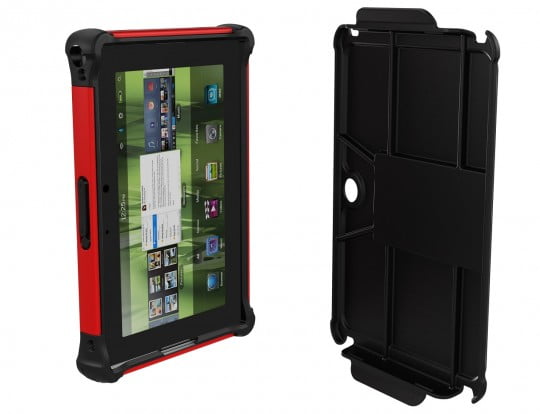 Although the BlackBerry Playbook has not been a huge success in the sales department there are still quite a lot of people that would rather die than part with their beloved BlackBerry phones and tablets.  Apple and Android powered tablets have been getting all the attention in the media and there are lots of manufacturers lining up to come up with thousands of accessories for those products.  But the lack of sales and media attention doesn’t mean the BlackBerry Playbook doesn’t have any accessories to go with it.

Ballistic has just announced their famous cases for the BlackBerry Playbook tablet.  The cases will provide protection against drops and knocks to the tablet and feature three layer protection; the cases will come with a shock absorbing polymer layer, an impact resistant hard plastic layer, and an inner silicone layer to protect your investment against the hardest of drops.  No word yet on when the tablet case will be available and how much it will cost.

Originally published on July 11, 2011 in Gadgets