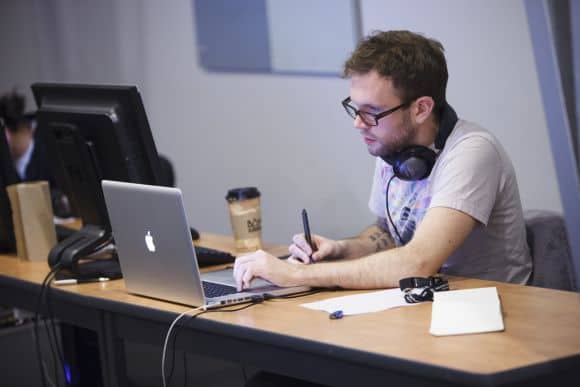 Interesting Geeky Companies That Got Their Start in a Basement

Tech and Other Successful Companies That Started in Parents’ Basements Created By: JES

If you’re looking for test prep and tutoring, Kaplan may be one of the companies you look into. It actually got its start in 1938 in the basement of Stanley Kaplan’s parents’ home. Kaplan noticed that many of the immigrant families in the Brooklyn area needed help preparing for a specific high school standardized test, so from this basement, he started offering personalized help. Nowadays, the Kaplan company takes in about $1.5 billion annually.

You more than likely know Epic Games from their hit game Fortnite, but there are plenty of other incredible games from this company, like Gears of War and Infinity Blade. Although it’s true that it’s a well-loved company nowadays, it started as “Epic MegaGames” in founder Tim Sweeney’s parents’ basement. He hoped that the name would make him sound like more of a big deal. Today, with the success of their various games, the company has a valuation of $15 billion.

FUBU, an acronym that means For Us, By Us, is a streetwear label that Daymond John of Shark Tank fame launched from his mother’s basement in Queens. He even used his mother’s sewing machine to do it. Extremely guerilla marketing techniques helped get the word out: he would pitch local hip hop artists, hoping they would wear his clothes in their music videos. That captured an extremely specific niche market and led to the company’s success; it now proudly carries a $6 billion company valuation.

You probably know Mashable from its variety of entertainment and gossip news options, and you probably didn’t know that it got its start in Scotland. The company has such an American feel to it that it’s hard to think it was started by anyone other than an American. In fact, Pete Cashmore, the founder, started it when he was 19, blogging from his parents’ basement. He desired an American audience’s attention, so with the help of the darkened basement, he mimicked an American sleep schedule, sleeping from 6:00 a.m. to the afternoon. In 18 months, he earned over two million monthly readers, and today, it has a valuation of $50 million.

In 2008, the founders of Cards Against Humanity planned to host a “party for misfits” on New Year’s Eve, which meant they were going to have 30-40 people in their home with no real direction. To help things out, they planned to create a structured party game, writing the first set of questions in one of their school notebooks. The first game occurred in Max Temkin’s parents’ basement, and from the beginning, they knew they had a winner on their hands. They had an extremely successful Kickstarter launch in 2010 and reached $12 million in yearly revenue within only two years.

By helping girls learn to code and feel enthusiastic about coding, Boolean Girl Tech aims to close the gender gap in tech circles. Its initial Kickstarter in 2016 was so effective that the company had more orders than they felt they could fill. They had 60 days to fulfill 180 orders, and with just two co-founders, they felt as though this just wasn’t doable. That’s when co-founder Ingrid Sanden had a bright idea: hire some of her 16-year-old daughter’s friends and make an assembly line in their basement.

A basement isn’t just a place where you can store things. It’s a place where ideas can grow and flourish. Make sure you keep your basement’s maintenance and care in mind. After all, you never know if someone’s going to have their next big breakthrough in your home’s basement.

Originally published on July 10, 2020 in Business